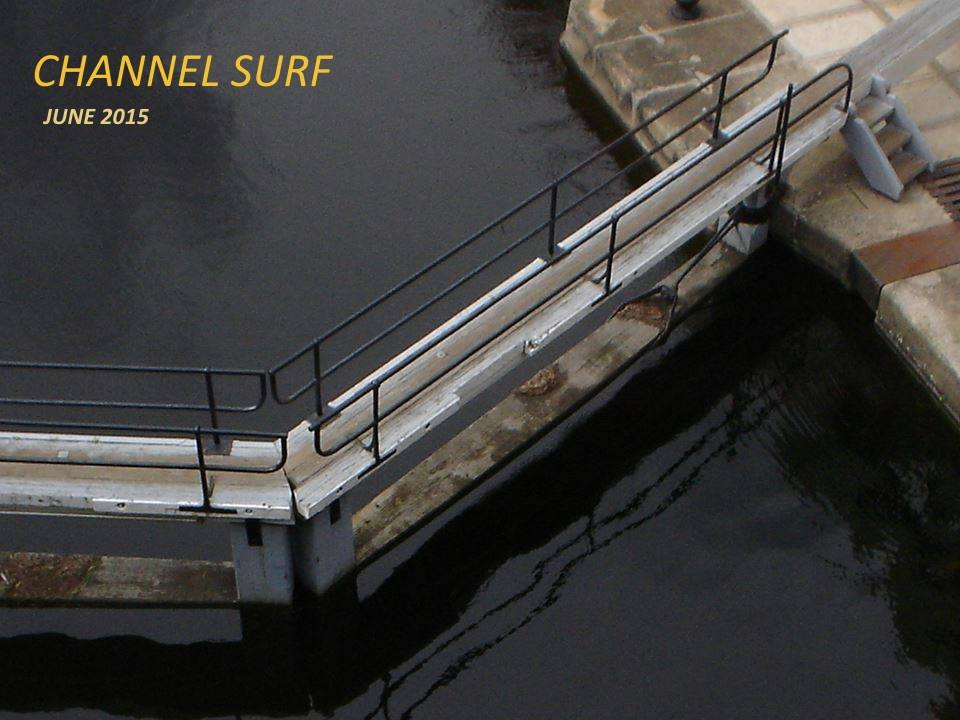 Channel Surf is an open platform for arts-based research that will unfold during a 200km journey paddling from Kingston to Ottawa along Canada’s Rideau Canal. With approximately 30 participants at any one time (the majority completing the entire trip and a smaller subset dynamically interchanging along the journey), it is envisaged that daily activities of co-creation and mutual learning will emerge.  Accordingly, the canal will metaphorically assume the role of information channel, and the paddlers that of data packets invested with inventive agency in transit.

Channel Surf is an event-based project hosted by the Department of Biological Flow that aims to bring together artists, academics, and community members (activists, healers, athletes and others) with a view to exploring practice-based learning through aesthetic experimentation in movement. Recalling the technics of analog television (through the tongue-in-cheek linguistic parallel of ‘channel surfing’), this paddling caravan of thinkers will engage the analog gesture of imagination whilst canoeing and camping along the length of the Rideau Canal over a 14-day period in June 2015 (following 18 months of research and internet-based collaboration). Significantly, the imaginative space of the canal/channel invites participants to dwell in the between of two signals (reminiscent of turning the dial on an analog television set), and in doing so, engage with the simultaneously fuzzy but unique image that is the threshold of passage. Each day, participants will paddle along the canal in the morning and early afternoon, make camp, engage in various aesthetic projects during the later afternoon, and then share communal meals and entertainment in the evening. The entire journey from Kingston to Ottawa is approximately 200km.

Participants in the two-week event phase of this project are invited to engage in one of three ways:

a)     Liquids: the core group of paddlers and campers who will begin the journey in Kingston and complete the entire passage along the Rideau Canal to Ottawa;

b)    Catalysts: those who cannot take part for the entire trip but would like the opportunity to join and/or depart the caravan mid-stream;

c)     Effervescents: anyone that would like to join a communal evening event on land along the way.

Day 1 begins at a to-be-determined art space in Kingston, Ontario through performing an adequate energetics or fuel for the event – first, in sharing a meal prepared by participants using locally sourced, regionally specific foods; and second, though a movement-based exercise and installation employing the theme of elasticity to foster a sense of connection and relational engagement for the event.  This “motor” will ignite the propulsion mechanism for the caravan boat launch on Day 2.

Over the next 12 days, the caravan will explore two different geospatial contexts for experiencing and thinking about art, philosophy, movement and pedagogy:

a)   As aquatic topology, in which bounded form moves fluidly between the relatively organic lakes and watersheds of the Rideau waterway and the rationalized lock systems that connect different elevations.

b)  As littoral threshold – investigating that which serves as a transition between the boundaries of water and land.

By extension, the caravan’s passage will produce a trajectory in which the historic villages and traditional territories of the canal or channel are implicated. Tempo also figures heavily within this experimentation with aquatic topology, and intermodal diagramming is used to inform a collective understanding of littoral thresholds.

Within this open platform for immediate and occurrent artistic invention, each mode of engagement with geospatial context moves the caravan toward the formation of a collective imaginary (an image of thought) that visions the threshold we call passage – much like static generated between two television channels. Daily interventions might include artistic creation, diagramming, shared meals, reading groups, movement activities, language and culture lessons, story circles, yoga classes, improvised music etc.

Finally, after arriving in Ottawa on Day 14, we will perform an anarchive of the event at Gallery 101. Anarchiving is a process of engaging materials emerging from an event context that seeks to challenge more traditional representational modes of documentation. Anarchived performance seeks to share the affective tone of a process or event rather than relay strict chronologies or typologies of identification. This is a mode of sharing and praxis that emphasizes the trajectory and tone of a creative work as a process rather than as the singularity of an item or object. The anarchive phase of Channel Surf continues the trajectory established in the first two phases by re-emphasizing that any performance of anarchive remains incomplete and open to the occurrence.

We have deliberately chosen to leave the articulation and explication of contextual politics as they emerge in the relational fabric of experience open in Channel Surf —to do otherwise would mean pre-forming and ascribing categories (and limitations) of identity that run counter to the theme of fuzzy thresholds suggested by the project.  Such an approach emphasizes a “politics of touch” that draws on previously established relationships between identities understood as divergent (eg. Indigenous and settler, stasis and flow, ecology and hierarchy)—instead encouraging listening as a primary technique of relational politics and passage. In this sense, aesthetic experience meets (micro)political praxis. This emphasis upon listening-engagement over communicative-demand encourages relational accountability in the broadest sense, for political relations are mobilized in the local-material relations of exchange. Consequently, notions of the gift, giveaway, waste and reciprocity will be explored with a view to offering new ethical gestures that might foster more meaningful collaborations between all participants. Although some participants have worked together previously, many will be new to one another. Given the dynamic and emergent nature of relations along the journey, new challenges for artistic process will be drawn primarily in terms of developing techniques of co-creation within a listening-engagement context.

Paddling: a loose conceptual narrative to be event(u)ally broken in process

Act One:
Toward an Evental Energetics (Kingston)

The Department of Biological Flow is a co-compositional experiment in research-creation practice between Sean Smith and Barbara Fornssler. We also often describe this practice more readily as that of precarious insects who develop an art-philosophistry of concepts and movement to inform curving vectors of life technique for survival in the control society. The name is an homage to George Lucas’ 1971 film, THX 1138.