THE RIVER SNAKED AND GLISTENED ACROSS THE LANDSCAPE 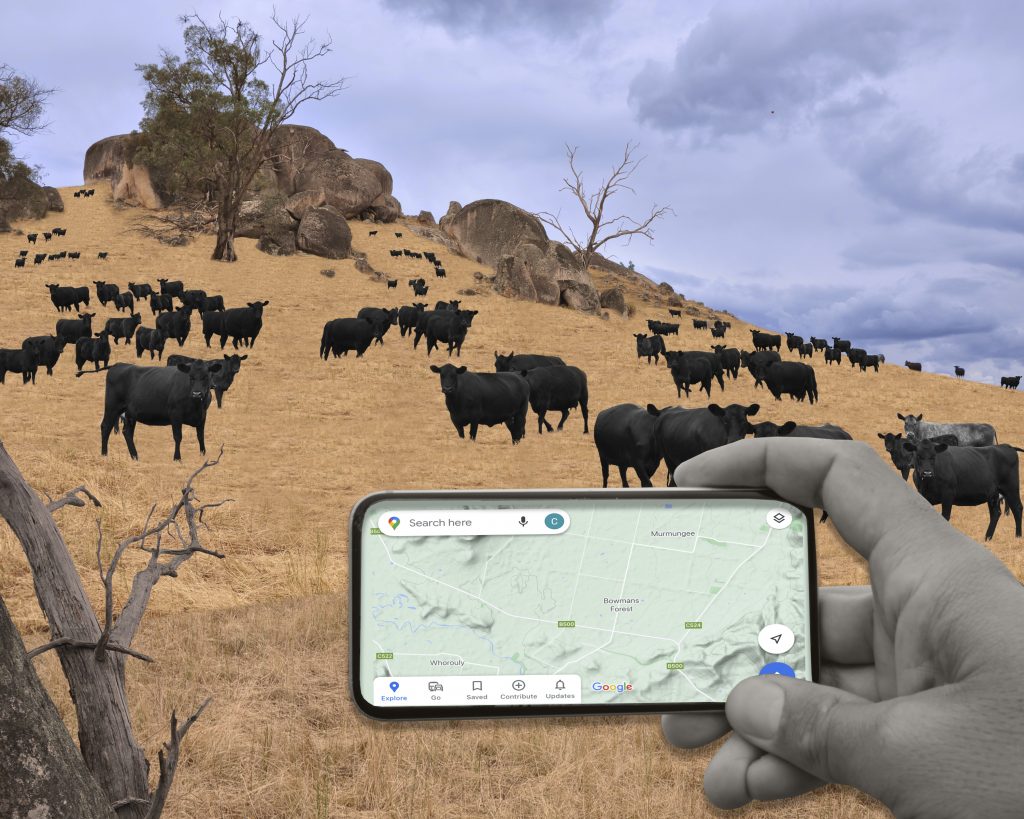 In 2020, Google revitalised the palette of its maps, streamlining the colours of the world from over 700, to 25 major and minor tones.  There is a seductively designed oral history page on the official Google website that features interviews with the team who developed the new colour coding.  Their aim, they say, was to ‘reveal more of the earth’s details’ while maintaining the map’s accessibility and its ‘recognizable-ly Google’ look.[1]  Alex Hern, in his Guardian article about the upgrade states that the new colours are ‘finally letting users distinguish forest from floodplain, and desert from snowfield, at a glance’.[2] His article includes a before and after image of Iceland. Before the update it is a white sheet, now it is an array of greens and whites, with a touch of brown and Vatnajökull, the largest icecap on the island, is clearly visible. 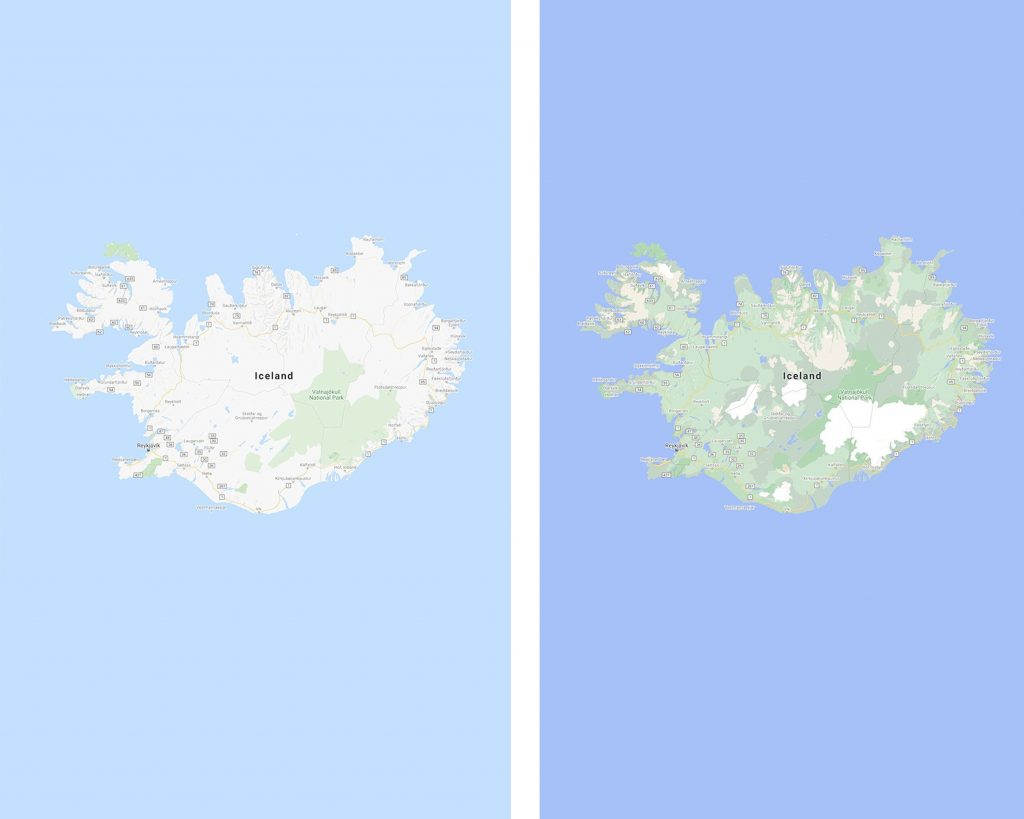 This project grew out of a research project in north-eastern Victoria which proposed the use of in-depth, in-person interviews to gather perspectives on what different actors are thinking about the future and past of rural Victoria.  Successive lockdowns, and university restrictions on fieldwork throughout 2021, saw a broadening of the research methods to include the use of digital platforms like Google maps and satellite view, and the use of memories. From 1996 to 2000 I drove along the Ovens Valley in north-eastern Victoria twice a day on my way to and from high school. This habitual journey through place, absorbed through the passenger window at one-hundred kilometres an hour, led to a strong visual understanding of the landscape surrounding the road.  When my settler-Australian memories of place were laid over the new Google Maps vision of the same location, I realised that Google’s machine learning, developed in North America, could pick up and identify radiata pine, a north American variety of pine used extensively in north-eastern Victoria’s timber plantations, but it could not ‘see’ eucalyptus forests.  Therefore, it would paint a pine plantation a dark green, while eucalyptus forests were painted the same colour as cleared pastoral land. 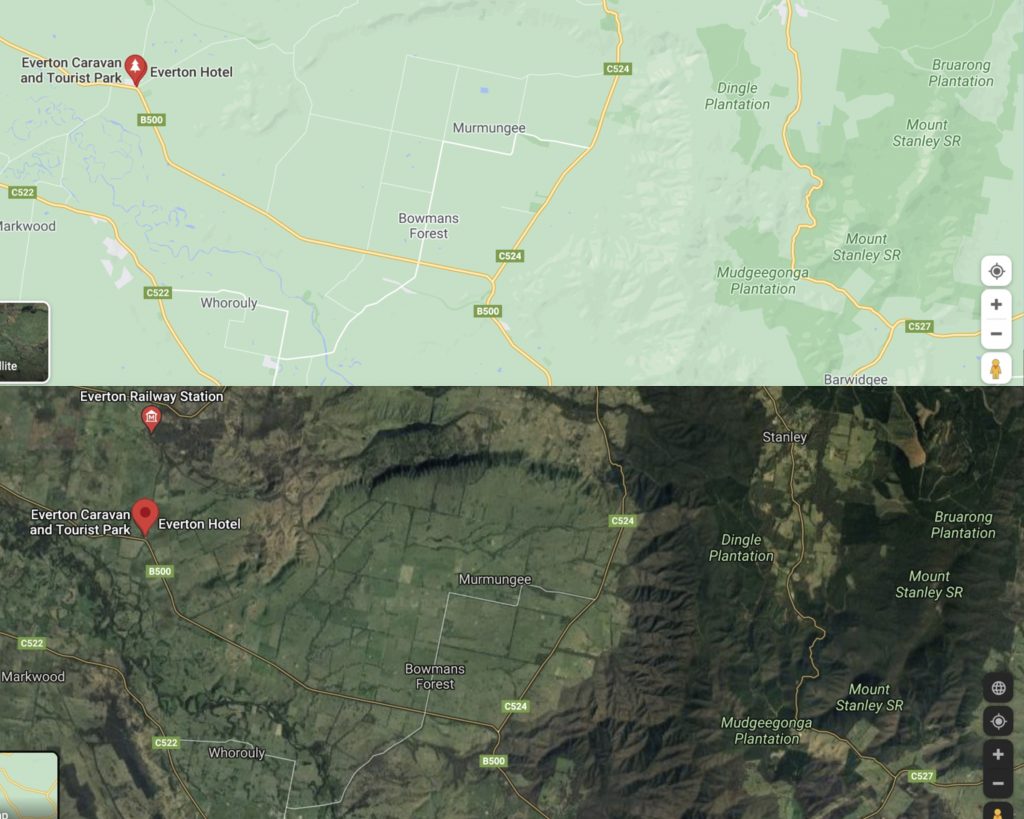 Google Map vision of the intersection of the Alpine Road and Buckland Gap Road beside a satellite image of the same site, 2020.

As Kitchen and Dodge have noted, critiques and research into Google Maps and street view tend to fit neatly into an optimist or pessimist binary; either celebrating the ‘playful’ user-led aspect of the system or ‘emphasizing its totalizing and controlling order’.[3] This project combines detailed analysis of historical literature (including revisionist histories) of the Ovens Valley with fresh ‘slow’ fieldwork to gather an understanding of what details Google Maps reveals and obscures in the Ovens Valley, asking: how does that vision compare to settler-colonial experience of rural landscape experienced at speed from a car?

The concept of ‘slow’ fieldwork comes from Mountz et al’s call for ‘slow scholarship’[4] and it is fieldwork that ignores the contemporary pressures of time to spend slow time in place.[5] To do this I propose a series of walks between Myrtleford and Wangaratta along the Ovens Valley and Ovens River that are deliberately taken at a slower pace so that I can listen and look closely at landscape.  However, this fieldwork will also be framed by a detailed understanding of the history of place as it will be executed after a thorough historical literature review of the Ovens Valley.

The fieldwork will also involve consultation with the Dhudhuroa, Gunai-Kurnai, Taungurung, Waywurru and Yaitmathang people, the Traditional Owners of some of the key tributaries of the Ovens River. It is hoped that I will be able to go on some walks lead by Traditional Owners, but this will depend on the Dhudhuroa, Gunai-Kurnai, Taungurung, Waywurru and Yaitmathang interest in the project. However, it must be noted that at this stage the section of the river that I will be walking does not have official Custodians.  There is an arbitration process underway that may, or may not, be resolved during the project.

Squatters descended violently on the Ovens Valley, illegally and without any type of bureaucratic oversite.[6] Drawn to the locale by the rich grasslands and high rainfalls, they overstocked land with cattle and sheep to the point that within 20 years the land where the township of Myrtleford now sits was damaged beyond repair.[7] The valley was then overrun by alluvial miners, followed by the largest concentration of dredging machines in Australia.[8] The history of colonised Australia is one of extraction, however, this is particularly true in this context.  While great care will be taken to find, consult and acknowledge Traditional Owners this project sits in a context where research into the Frontier Wars and Traditional Owners is in its infancy. It is still common for official histories of the locale to argue that the population was wiped out. This is most certainly not the case, but the prevailing myth speaks to the way in which the concept of terra nullius continues to frame land use and occupation in this area. While these types of complexities are not unusual in the Australian context, it makes the process of considering what the work might give back to Traditional Owners and how to support a multi-vocal, rather than an individualistic, reflection of land particularly challenging.  Therefore, the project will at all points endeavour to engage with Custodians and Indigenous histories; as focussing solely on the settler-colonial would, as Kauanui has observed, reproduce another form of elimination and extraction.[9]  By including a detailed analysis of historical literature of the Ovens River, including contemporary revisionist histories, as part of the project process, this project will acknowledge that contemporary contestations of place and mapping are outcomes of settler-colonial structures that manifest differently today but, in an absence of a transfer of sovereignty, as Carey and Silverstein have noted when reflecting on the work of Birch, should be understood as ‘200 years of recreating and reproducing colonial practices’.[10]

During the fieldwork detailed notes will be written.  These notes will then be weaved together with memories of the same location and analysis of Google Maps to build a multi-sensory understanding of how place is recorded through Google Maps, slow fieldwork, and the memory of driving through place.

In their research into landscape and memory Evans and Jones found that participants remembered more about place when they were in that location. The landscape affected the anecdotes, as the participants memory was jogged by the physical appearance of things relating to that memory.[11] Therefore, the fieldwork, will not just allow for the comparative analysis of Google Maps to landscape but it will also help me retrieve my memories of the location.

As the art historian Miwon Kwon has noted, in recent times artists have moved away from the term ‘site-specificity’ as a general description of their work to instead embrace more nuanced terms such as ‘site-determined, site-orientated, site-referenced, site-conscious, site-responsive and site-related’ to ‘account for the various permutations of site-specific art’ in contemporary practice.[12] While this expansion of nomenclature, as Kwon argues, points to a type of return to ‘the site-specific practices of the late 1960s and early 1970s, which incorporated the physical conditions of a particular location as integral to the production, presentation and reception of art’, it highlights a desire by artists and critics to judiciously reconsider the relationship between site and the artwork.[13] As, such, the art outcomes for this research will be what I call ‘site-responsive’ as they will come directly from the fieldwork experience, including their materiality and form; yet, unlike site-specific art, they will not lose meaning when they are exhibited outside that context.  In other words, they are performed into being through the experience of the fieldwork, but the perception of the works is not always bound to a specific time and place. As such, the material and form of the outcome remains open and will only be determined after the fieldwork has been conducted.

In his seminal book on the power of maps Denis Wood noted that maps play an integral role in the discourse that ‘shapes’ the way we see and understand our world.[14]  Google Maps is currently the most used mapping system in the world, and, unlike the paper maps of old that Wood’s reflected on in his book, it travels with us most of the time. Consequently, its discursive impact is arguably even greater. This research project joins the emerging field of scholarship that is looking closely at the way in which Google Maps shapes place. However, by focusing its analysis on a section of Australia that was habitually experienced by the researcher as a child it proposes to develop a more complex analysis of the mapping system that not only considers what is included and excluded from the map, but also considers how those inclusions and exclusions relate back to the long history of settler-Australians struggling to read and understand their landscape.

Clare McCracken is a site-responsive artist and early-career researcher and program coordinator of Art: History, Theory & Cultures at RMIT University, Naarm/Melbourne. Her practice-led research sits at the intersection of art, human geography and urban theory. She employs innovative, performance methodologies to research how systems of mobility coproduce space, place, and landscape across generations in Australia. In 2019 Clare won an RMIT University Research Award in the Higher Degree by research Impact category for her PhD research. Clare has exhibited across Australia and internationally, is a regular finalist in contemporary art awards, and has artworks included in private and public collections including the State Library of Victoria.

[7] Robertson, Myrtleford: Gateway to the Alps.