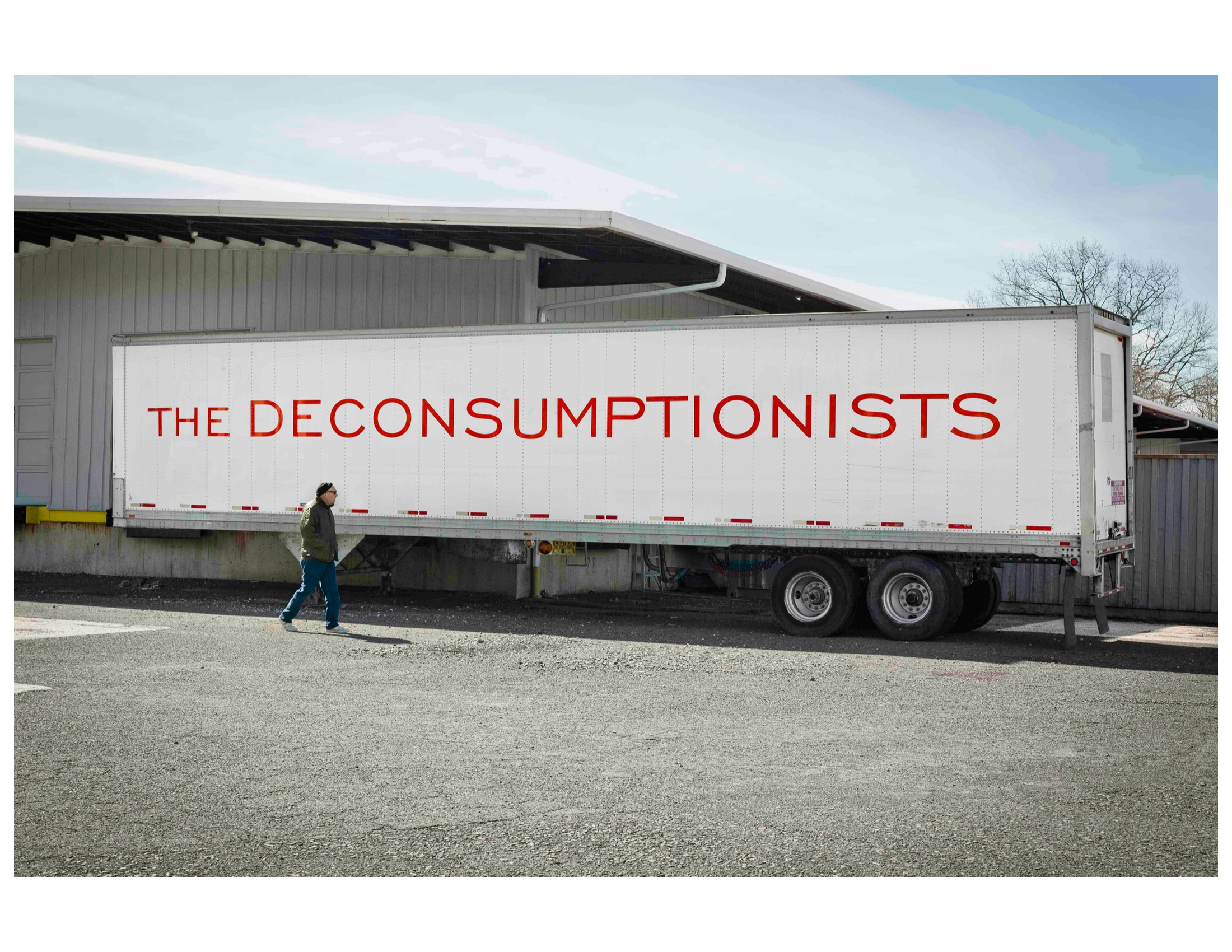 The Deconsumptionists, Art as Archive  (EIDIA – aka Melissa P. Wolf and Paul Lamarre) 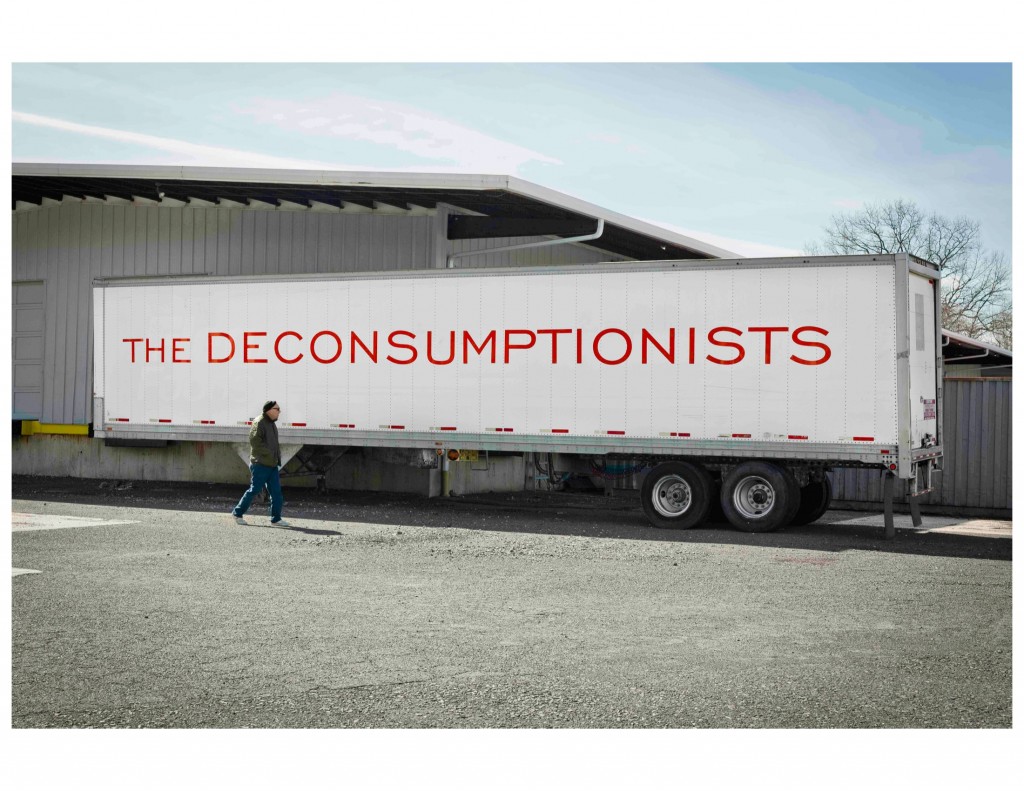 At the time of writing, The Deconsumptionists is at FARM gallery in Toledo, Ohio (with further exhibitions and events forthcoming).

His attitude teaches us … that the end of artistic activity is not the finished work but freedom. The work is the road and nothing more. Octavio Paz on Marcel Duchamp[i]

Nothing is thus more troubled and troubling today than the concept archived in this word ‘archive’. Jacques Derrida[ii]

The Deconsumptionists, Art As Archive is physically realized in a semi-trailer 48′ x 13′ x 8′ as an outpost for artistic research and for propagating and promoting the discipline of “sustainable” art practice. With the aid of a solar roof, the project is designed to function independently as an art exhibition / performance site for public engagement and interaction. In a future plan, the structure is to be retrofitted with living quarters for an artist residency accommodating two persons. A distinguishing feature of this (3,184 cubic feet) aluminum and steel rectangle on wheels is an archive of 171 boxes containing the collaborative accumulation of the 30-year art practice of EIDIA. Each box is wrapped in ‘caution orange’ plastic and secured with a royal blue number tag. All contents of each box have been photographed to document the archive’s holdings, evidenced in the resulting ‘nature morte’ images, each titled by the number on its box.

Being a long standing collaborative, we initiated this project as an archive for our collective works for consideration of their preservation, distribution or dissolution. Our intention was to reactivate artworks long since completed—an exercise in recycling and reconsidering the signifier (previously created art) as “new” work (essentially appropriating the self).  This proto-creation through new knowledge and value recontextualizes the existing object—thus transmogrifying it with new meaning.

The Deconsumptionists project is a ‘push back’ – a protest against the ‘control’ inherent in the ‘curated’ mediated (capitalistic) model of ‘white cube’ exhibition space and what defines ‘archive.’ This process involves the merging of mundane objects, or as Antony Hudek puts it “commodities constituting a private, coded language— or in Marx’s words a system of ‘social hieroglyphs.”[iii]

There is an obscure vision of the future. Can we continue as now, or can we invent something really different? It is unclear. We must define a new form of “freedom.” I think today freedom is largely the freedom to buy something or the freedom to have money—the freedom to do what we want when we have the money to do … And so the freedom of today is in fact a material freedom which is a strong dependency on the situation of the “crisis” … We must search and find another definition of freedom which is much more at the subjective level, and on the side of creation, on the side of the possibilities of mankind, in the fields of: new forms of political organization, new artistic creations, new inventions, a new style of life. Alain Badiou[iv]

In effect, The Deconsumptionists seeks to represent a new form of aesthetic freedom – one not defined by the quantity produced and finance invested in the art practice but rather one predicated on collecting and editing preexistent things/objects. Consequently, items once produced as new designs and inventions, later discarded as trash, are then rescued and re-invigorated with value and pertinence of meaning.

Once inside, the trailer visitor experiences a peculiar sensation of the space as a readymade mise-en-scène. Accordingly, they becomes cognisant of ‘new knowledge’ a new experience, a new sensation.

The invention of the readymade represents a tipping point in the history of art, an innovation whose posterity has been prodigious. With this radical gesture, which consists of presenting an everyday object of consumption as a work of art, the entire lexical field of the visual arts found itself augmented by a new possibility: signifying not with the aid of sign but with reality itself. Nicolas Bourriaud; reference to Marcel Duchamp’s Bicycle Wheel, 1913.[v]

The Deconsumptionists, Art as Archive is conceived as a new version of “archive” and as an action of aesthetic resistance. The project is essentially a massive movable readymade that posits the modalities of reassembling, repositioning and reshaping preexistent forms (found objects and ephemera) with a view to provoking a disparate conversation about consumption and production (and an ‘everlastingness’ as art).

The Deconsumptionists, Art As Archive extends the responsibility of ‘cultural producers’ by examining the struggles and contradictions inherent in the production of art within the capitalist economic model. What is the global impact of what we produce economically, ecologically, and socially? Are artists a part of the problem or of the solution? Should we consider that the end product of a life‘s work could end up stored in some foundation’s collection or as landfill? In facing this literal possibility, we seek to alchemize materials of the past designed for a variable means and purposes (a used semi-trailer, random objects of decorative, functional, fashion content, and objects made to entertain), and in doing so, hope to offer new significances and meanings to these objects in a world of crisis and catastrophe.

The Deconsumptionists seek to travel nationally and internationally. On location, local artists, architects, designers, performers and activists are invited to collaborate to create a variety of exhibitions, public programs and events.
Please visit http://www.eidia.com/ for more information about this project, EIDIA and our numerous other projects. 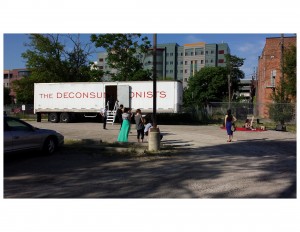 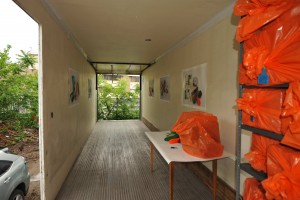 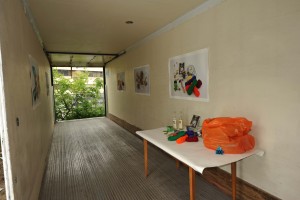 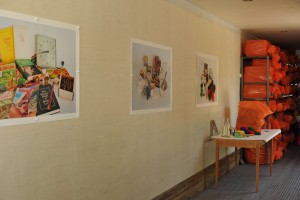 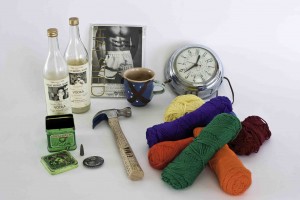 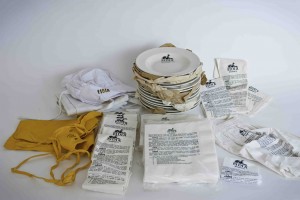 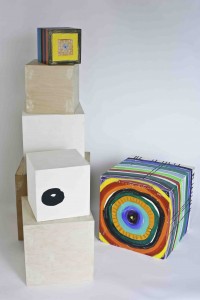 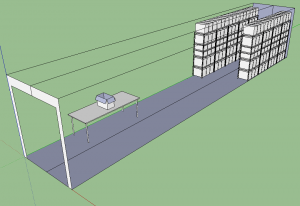