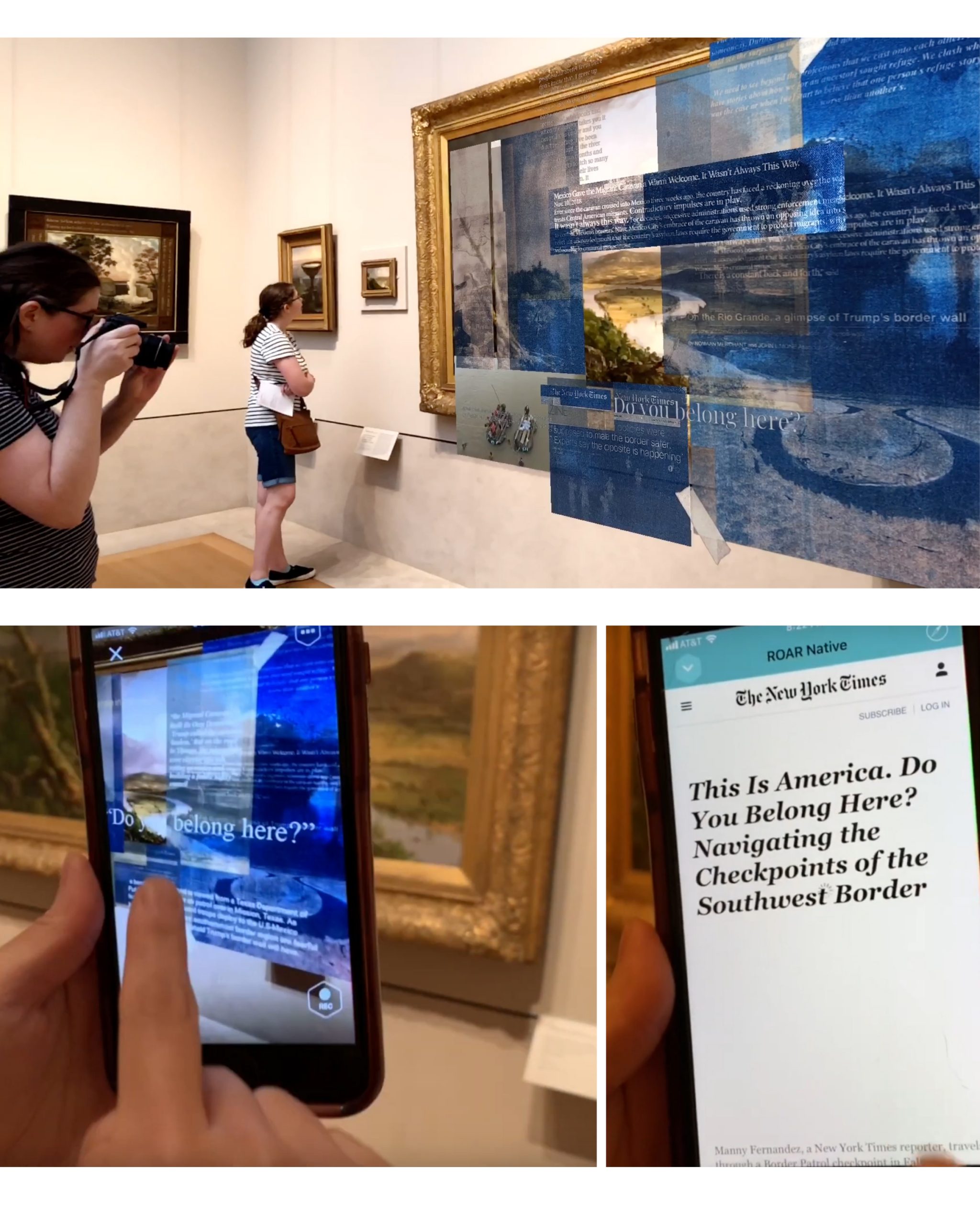 The production captures the artist’s impression of America, observing the national landscape from within as a resident alien[ii] — a view of the country caught between preserving (a somewhat Romantic notion of) its national identity while embracing multiculturalism. The AR collage imagery of the country’s present-day challenges adds dimension to these “quintessentially American” views, resembling the way immigrants come to America and expand/build upon/add dimension to the country’s foundations.

The production engages a public in an alternate experience in two regards: one technical the other aesthetic. By configuring an AR experience in which all text/video/image elements can be ‘touched’ (tapped) by the viewer on the device and by introducing a collage-like “aggregate” aesthetic that relates to the artist’s cyanotype works on canvas, this production 1) introduces to viewers nuanced readings of these historical paintings through a contemporary lens, 2) heightens the viewer’s awareness about the world we live in today, and, 3) deepens their interaction with the physical environment of the museum in which the existing methodologies of engagement between viewers and the exhibit largely remain passive.

From a museum administration standpoint, this production imagines, in a contained scale, what an inter-departmental collaboration between curatorial (both Contemporary and historical) and Digital departments, facilitated by AR, in an encyclopedic museum may look like, the interdependency of disciplines inherent to this installation’s construct.

The original paintings on the Met’s walls are at once triggers (without which Park’s AR collage does not come into view) and “altered readymades” (without which Park’s AR compositions aren’t complete). The production does not oppose or dismiss historical paintings, but rather expands upon them conceptually and technically. AR, in this work, is at once an artmaking medium and a mode of content delivery and audience engagement — the artwork’s ability to track the number of viewer interactions is inherent in the medium the work is made in.

Though this is a ‘virtual’ artwork, the experience is anchored in a specific physical environment — the American Wing galleries at the Metropolitan Museum of Art. This site specificity means viewers still have to make the pilgrimage to the museum in order to see this AR installation. As Michael Kimmelman noted, as the Web and mass media flood everyone with the same images, sufficient appreciation for the virtues of the pilgrimage is being lost, and, it also resulted in creating a “newly heightened role for the one-of-a-kind encounter.”[iii]

Thomas Cole’s View from Mount Holyoke, Northampton, Massachusetts, after a Thunderstorm—The Oxbow (1836) is laden with juxtapositions and union of the opposites — the sublime and the picturesque, the untamed wilderness and the pastoral settlement –, conveying the Cole’s (and his contemporaries’) ideals of the national landscape, the future prospect of the American nation.[iv] What kind of romantic ideals and reality has the nation’s landscape come to hold since?

Romanticism began in Europe in the early nineteenth century and sought to idealize the natural world amidst a rapidly industrializing continent. As it migrated to the other side of the Atlantic, American artists’ reverence for nature adopted a flavor of patriotism that bolstered the new country’s sense of national pride and superiority over the Continent in a sense that the American land offered the promise of limitless natural resources on a vast scale that the Continent lacked. Threatening the beauty of this landscape was anxiety about the incoming dangers of economic development and industrialization. The tension between what is perceived as inherent to the American land (and values) and the advancement of newly introduced elements (or “dangers”), first symbolized in the landscapes by Romantic era painters, seems to continue to this day as we observe America’s relationship with the immigrants today.

In Park’s composition, notions of water and flow are highly present. In selecting the three iconic paintings by American 19C masters at the Met, Park gave particular consideration to those with strong presence of water in their respective compositions, upon which to overlay digital compositions of her own that weave together images of Central American migrants attempting to cross the U.S. border via rivers. Here, the dramatic bend of Cole’s river casts an inverted reflection, an aerial view of the part of Rio Grande river with Trump’s proposed border wall. AR text, videos, and images of migrant rafts spill over the painting’s (and America’s) gilded borders. 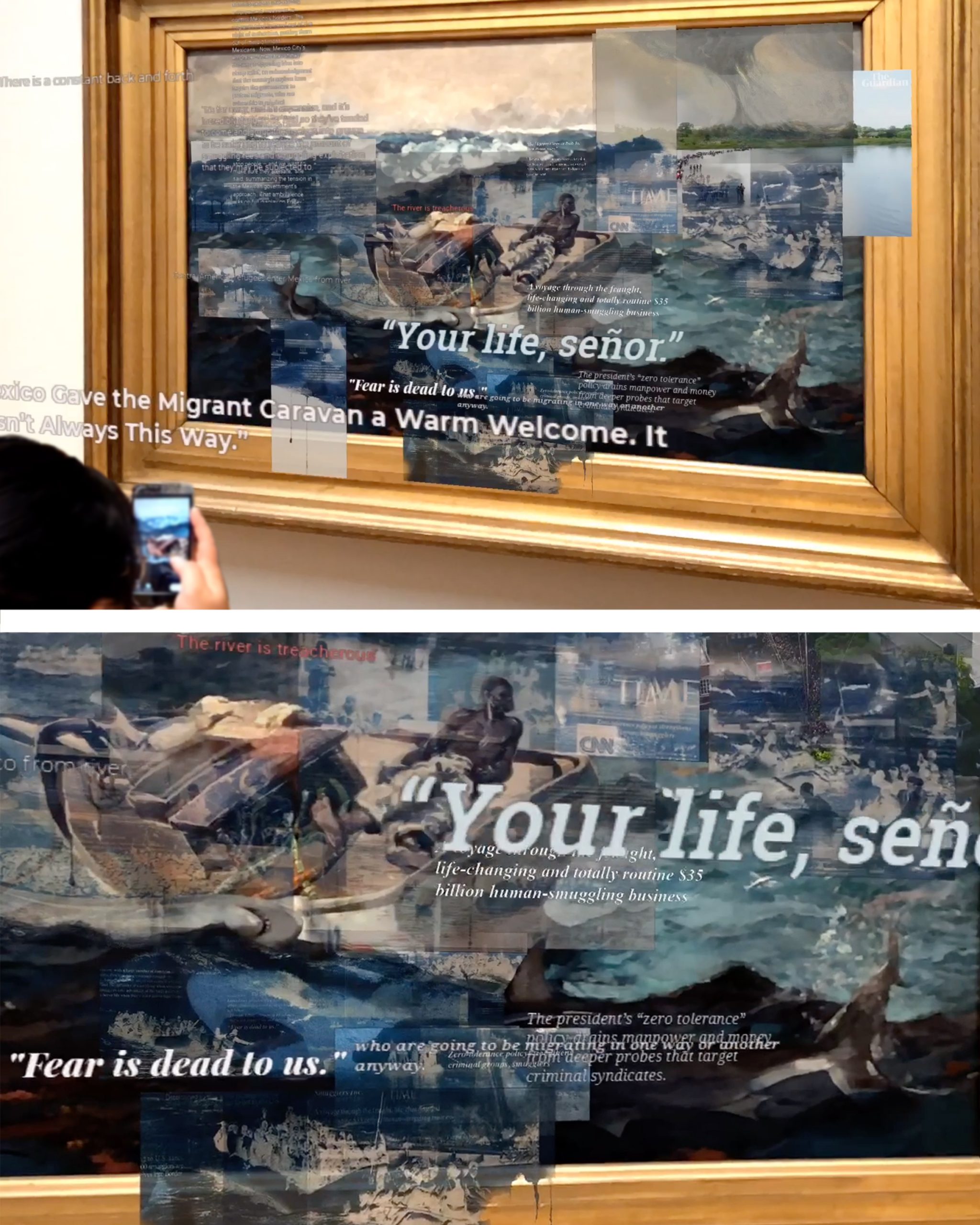 Winslow Homer’s The Gulf Stream (1899) is commonly read as to depict the vulnerable facing peril, with the sharks lurking in the water representing imminent danger.

​In Homer’s shark-infested water, Park reads the cruelty of men preying on the vulnerable. The lone figure in Homer’s boat now casts a reflection on the ocean surface of a boat jam packed with refugees.

The Gulf Stream ocean current originates off the Mexican Gulf Coast. As of the work’s making, the coastal land here is fraught with kidnapping gangs and smugglers (the real sharks) that prey on the migrants en route to south Texas. As if sharks, images and headlines reporting on the rampant crimes targeting migrants encircle the boat(s).

All text and video elements in the AR compositions are “touchable”—when tapped, they take the viewer to corresponding source articles that had informed Park’s collage composition — equipping the viewer to trace his/her way backward in the artist’s process. 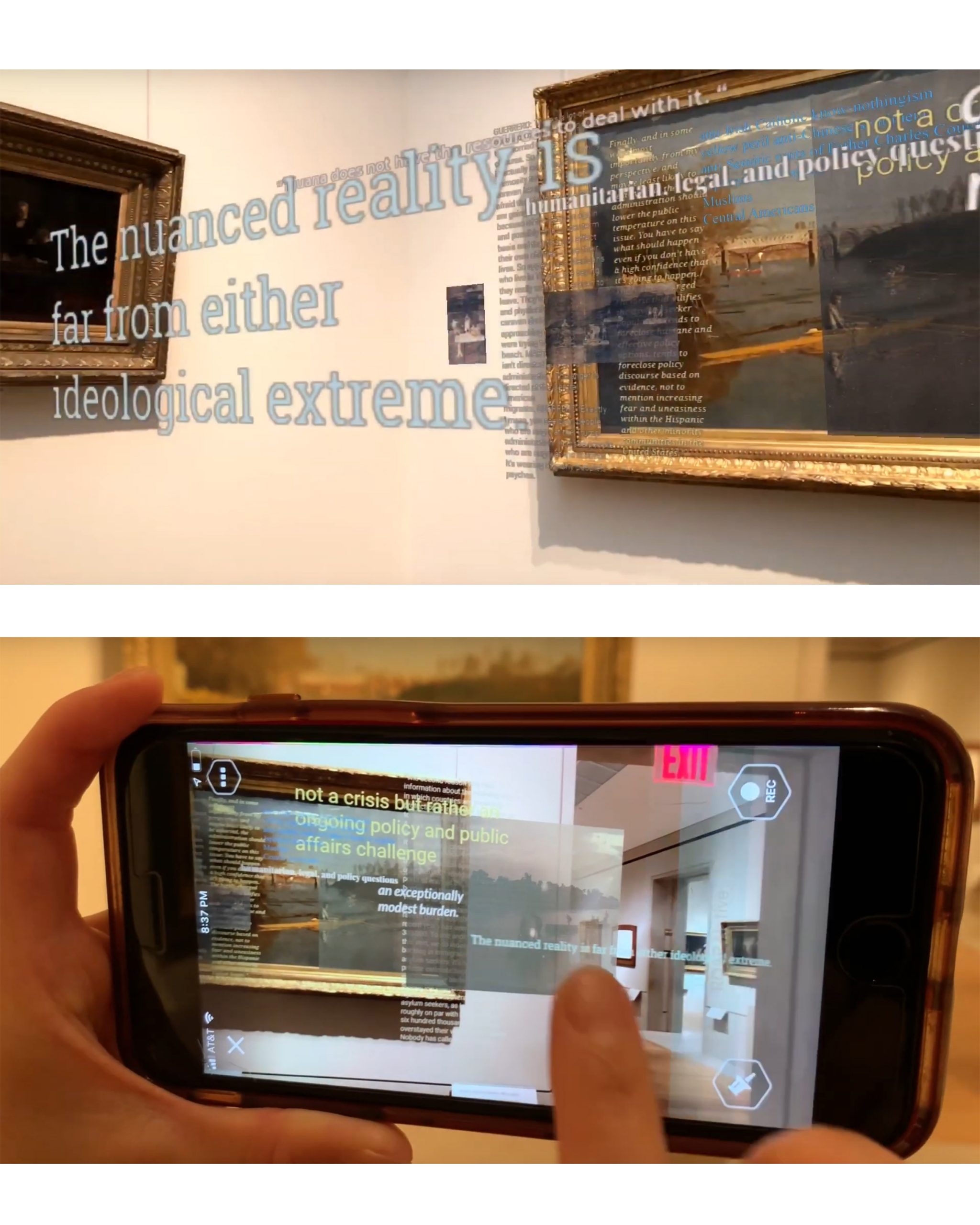 In Thomas Eakins’ The Champion Single Sculls (1871), Max Schmitt looks out over his shoulder after a race.[vi] The mood has the kind of euphoric, contemplative calm and clarity of mind that comes after physical or sensory exertion. This AR composition conveys the almost paralyzing amount of noise that envelops the country today, and the difficulties we face trying to make sense of it all. When sensationalist noise obscures our vision, how do we find voices of cool-headed reason?​

As a whole, this installation spanning across these three galleries lays out a view of America’s national landscape as it stands today—the country the artist came to live in, whose artistic history she studied, whose present day struggles she observes.

This production proposes a domain in which the binary between painting and mechanical production and the functional divide amongst various departments in an encyclopedic museum dissolve. The work imagines a possibility in which principles of various fields that rarely interact with one another —mass media, aesthetic production, digital technologies, museum administration, and art historical research— can come together interdependently and create an aesthetically, conceptually, and functionally holistic audience engagement.

Furthermore, the project brings to the art community a series of questions worth considering: who owns the virtual experiences within the physical walls of museums? From the content makers’ perspective, what’s a responsible and respectful way of “plugging in”? Will museums at some point “firewall” their respective spaces from unsanctioned virtual projects? What may be ways to incorporate AR not just in contemporary galleries but in historical galleries? Park argues that meaningful marriage between AR technologies and art can extend well beyond the narrow timeline bracketing Contemporary Art.

[ii]  A term of classification for a foreign person who is a permanent resident in the United States in which he or she resides but does not have citizenship.

[iii] Michael Kimmelman, The Accidental Masterpiece on the Art of Life and Vice Versa (Penguin Books, 2005), 176.