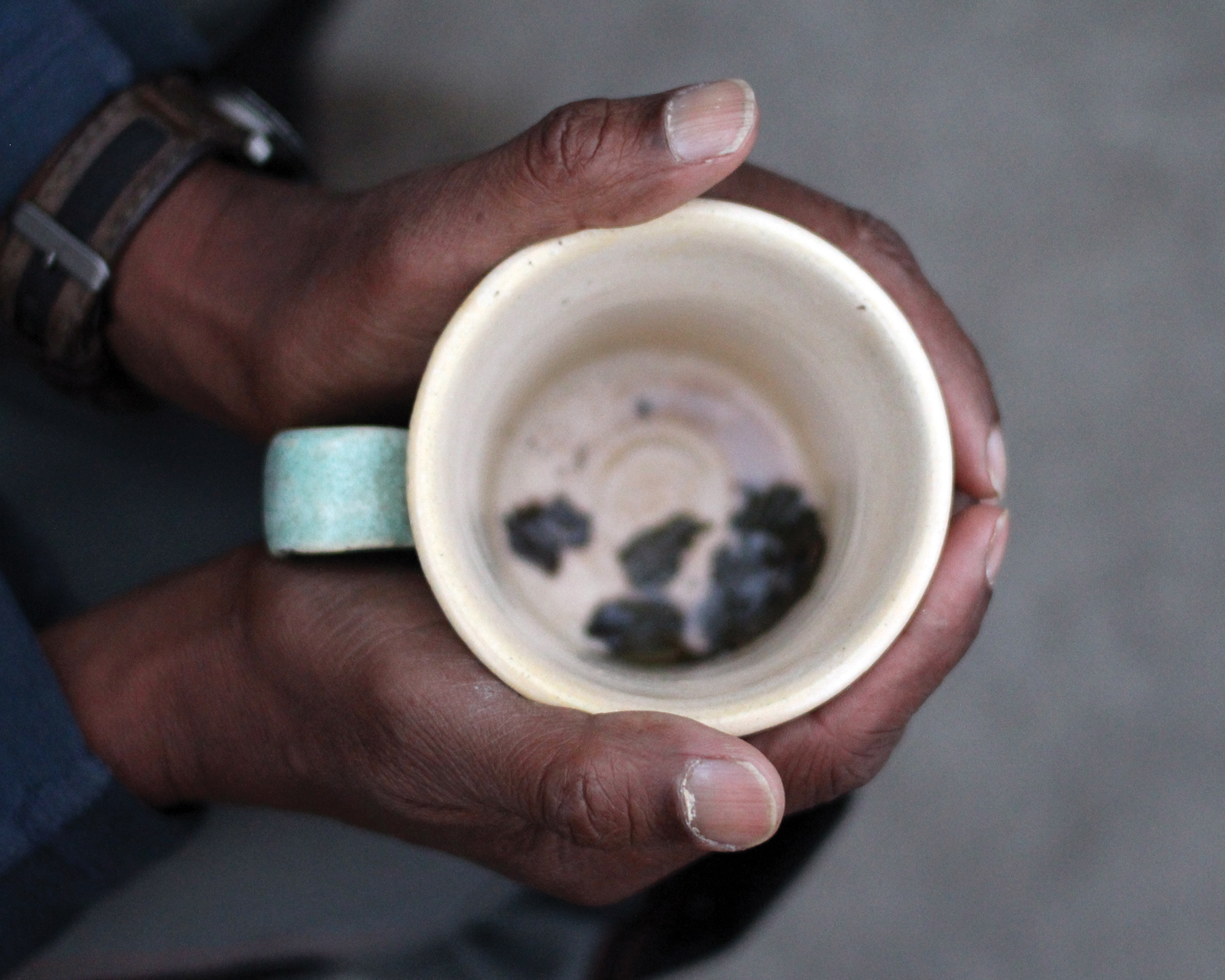 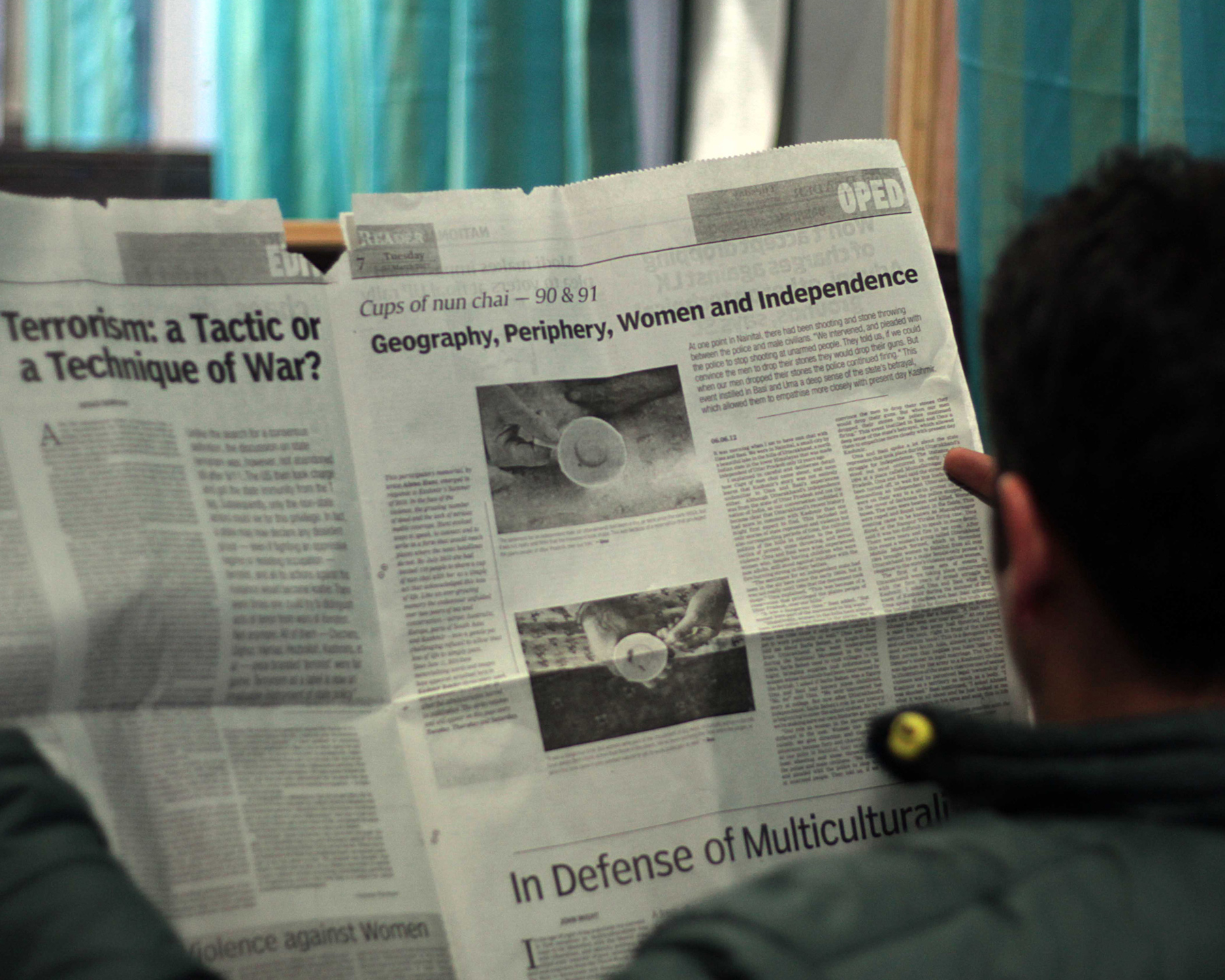 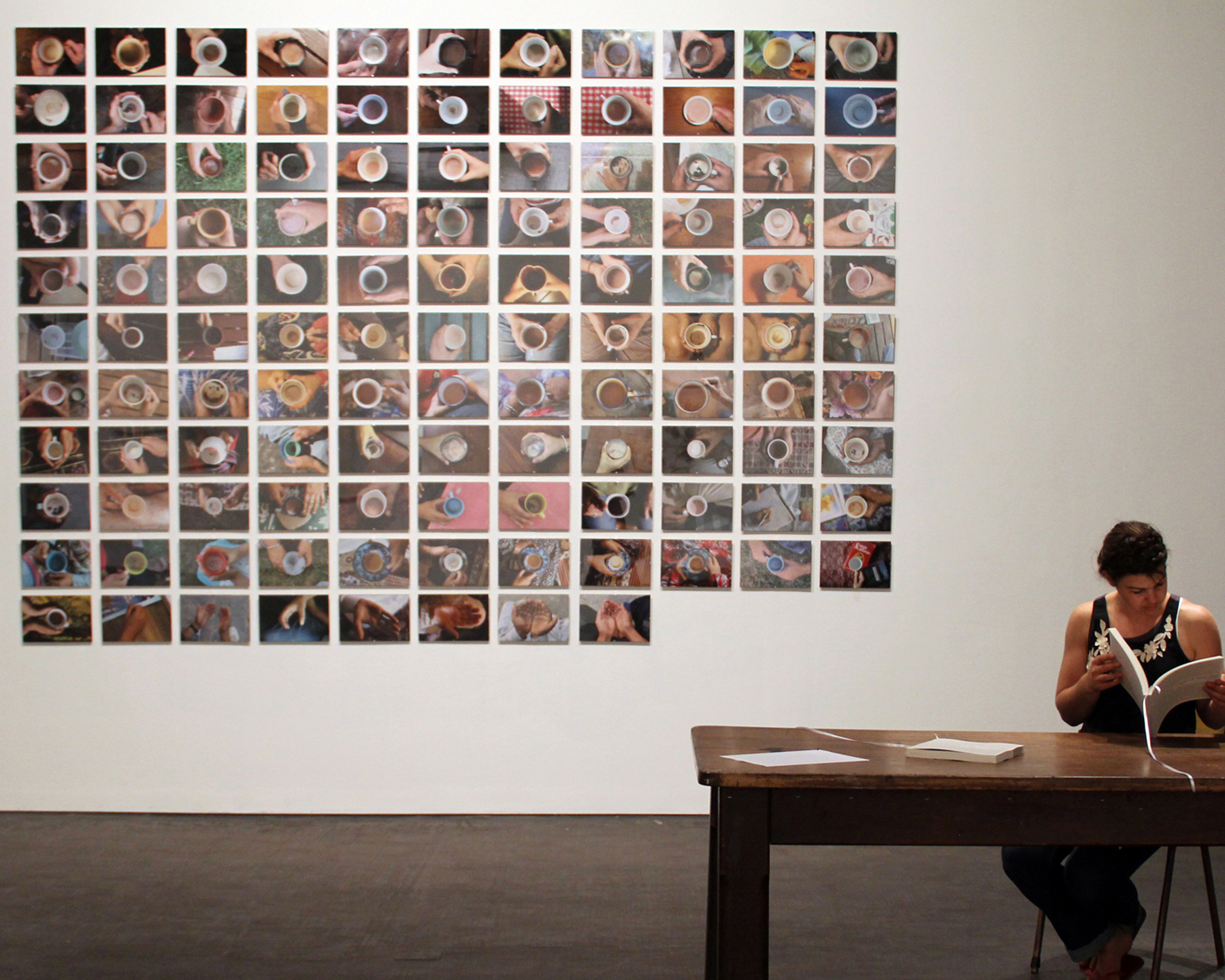 Cups of nun chai is at once a search for meaning in the face of something so brutal it appears absurd and an absurd gesture when meaning itself becomes too much to bear.

This work is a participatory memorial that emerged from the summer of 2010 in Kashmir when 118 civilians died in pro-freedom protests against India’s military occupation. Over the course of two years artist Alana Hunt shared 118 cups of nun chai (a Kashmiri salt tea) with 118 people across Australia, in Brussels and Bangkok, across different parts of India and finally in Kashmir. She took a photo of each person holding their cup of nun chai and wrote from memory about each conversation, which connected Kashmir’s story and the summer of 2010 to countless other places and people around the world. Cups of nun chai began as a gentle yet challenging refusal to allow this loss of life to simply pass. It is an exploration of how we encounter, respond to, and remember political violence.

Since 2010 the work has accumulated progressively online, where it was able to reach audiences in Kashmir and beyond. In June 2016 Cups of nun chai began its life as a newspaper serial, appearing three times a week in the Srinagar-based Kashmir Reader and reaching tens of thousands of people on a weekly basis. These 100+ newspapers are now bound into three volumes with accompany essays by Kashmiri author Arif Ayaz Parrey, the former editor of Kashmir Reader Hilal Mir, and artist Alana Hunt. These volumes quite literally, take Kashmir’s own media out into the world, into the heart of India’s political capital and also well beyond, enabling those outside of Kashmir to glimpse Kashmir’s own story, and the creative centre of this participatory memorial to continue indefinitely…

Through personal conversation and public media intervention Cups of nun chai explores some of the most challenging areas of contemporary life including the failures of democracy, state violence, armed struggle, the inherent fragility of the nation state, and the power of the media. Cups of nun chai embodies the literal collision of memory and news, of subjectivity and event, of absurdity and urgency, and of fury and sensitivity.

Kashmir is the most densely militarized place in the world. There is little to no space in the public sphere for art and critical cultural discourse. By utilizing newspapers as a means of ‘exhibition’ Cups of nun chai was able to circulate in Kashmir to places and people it would never otherwise reach. Furthermore, the juxtaposition of the memory of 2010 beside the news of ‘today’ worked to highlight points of historical change and repetition.

Almost a month after this media intervention began the death of a popular rebel commander set off a wave of violence not seen in Kashmir since 2010. Hundreds of thousands of people across Kashmir came out to mark the martyrdom of Burhan Wani and his companions. Protests unfolded. Mourning continued. And the state responded with ever-greater force. Once again in Kashmir people were dying and suffering serious injuries on a daily basis. Over one thousand people were blinded by the use of pellet guns. Over ten thousand were imprisoned. Kashmir Reader, the newspaper carrying Cups of nun chai, was itself banned for three uncertain months. In the public imagination of Kashmir, and in the press, the news of ‘today’ collided with the memory of 2010 in momentous ways.

Cups of nun chai sits in the middle of a venn diagram between personal quietly subversive acts and large mass media visibility. Exploring radical acts of the personal and political across and within cultures, privately and publicly, this body of work has resulted in an archive of experiences, memory, public intervention and print, that moves beyond the India/Pakistan story that dominates Kashmir’s popular narrative to give space to a nuanced and unusual exploration of Kashmir’s reality with relevance to the world as a community we all share.

Alana Hunt makes contemporary art, writes, and produces experiments with media forms. Her work is grounded in the capacity of art and ideas to intervene in the public sphere and shape the social space between people. Influenced by the (post) colonial worlds of Australia and South Asia the politics of nation-making and the fabric of community run through her work in quiet yet consistent ways.

Since 2009 Alana has orchestrated participatory art and publishing projects that have activated different media to shed light on the military occupation of Kashmir and the divided region’s struggle for self-determination. Paper txt msgs from Kashmir (2009-2011) emerged from a ban on pre-paid mobile phones in the region, and prompted the media in India and Pakistan to discuss the phone ban, which they had previously been silent on. From mid-2016 the 7-year participatory memorial Cups of nun chai (2010-17) circulated as a newspaper serial in Kashmir reaching thousands of people on a weekly basis during a period of civilian uprising and severe state oppression. This work won the 2017 Incinerator Art Award. Alana’s article A mere drop in the sea of what is, published by 4A Papers, explores the art circulating on the ‘streets of social media’ in Kashmir. Portions of this paper made it into the Hansard Report of the Australian Parliament; evidence we are not working in isolated echo chambers but massive cultural ecosystems with porous borders.

Alana lives on Miriwoong country in the remote north-west of Australia. She exhibits and publishes regularly, both in Australia and internationally, and is particularly passionate about cultural practices unfolding outside of city centres. She is currently exhibiting a new body of work for the exhibition Landing Points at Penrith Regional Gallery to coincide with the twentieth anniversary of Tracey Moffatt’s seminal photographic series Up in the Sky.