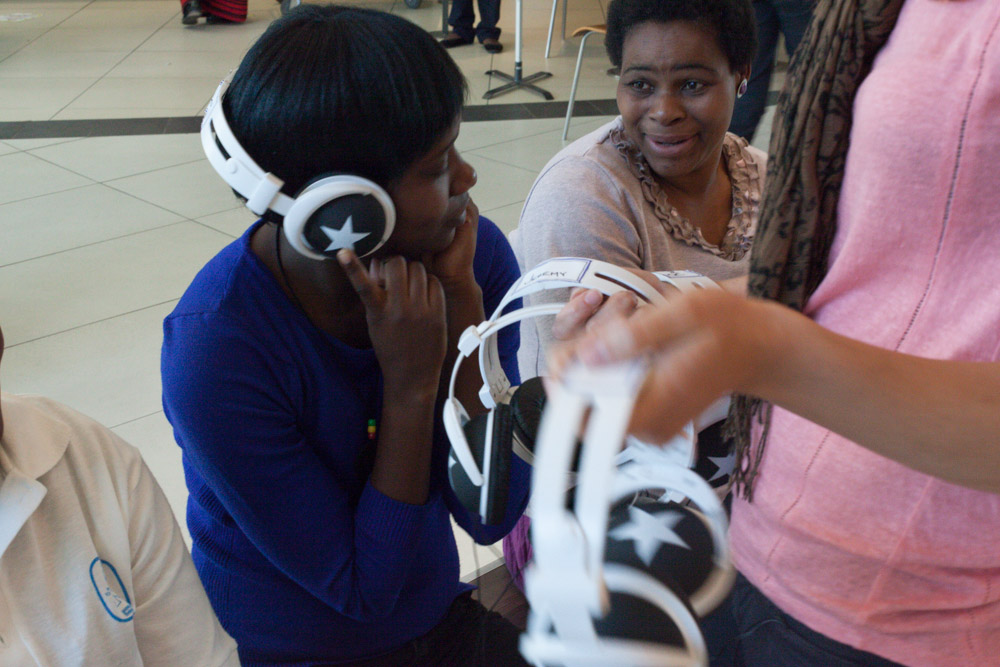 Through multiple interviews with artists and audiences that participate in ‘walkabouts’, Erin Bosenberg examines the value of intimacy. Bosenberg is particularly interested in the way in which intimacy – manifested as a process of imagining ‘closeness’ to various narratives – might allow for an expansion of stories and meanings built in relationship to works of art. Using interviews as a creative medium, Bosenberg then builds soundscapes that combine interview excerpts and appropriated fragments of audio referenced within each interviewee’s reflections and stories. Transporting these soundscapes into commercial mall spaces, they are then offered for public listening. Through this process, Bosenberg aims to articulate reflexive connections between narrative, intimacy, empathy, listening and imagination. Public interventions, inspired by the content of each interview, then in turn inform an on-going process of making and sharing. Finally, a manuscript titled Speeches From A White Cube will be built into plinths on sidewalks in front of art institutions and handed out to passers-by. Each page contains an imagined speech in poetic form inspired from one of the interviews. Through this process, Bosenberg aims to critically examine the frames within which we choose to discuss art and its relationship to issues layered within personal narratives. Here, Bosenberg hopes to produce a contrast between authoritative frames and codes of gesture within an art-world context and an audience’s ability to locate connections between lived experience as knowledge and information conveyed by a museum or gallery. For Bosenberg, the ‘walkabout’ contains a potential for the meeting of multiple narratives that inform meaning around artworks and artists themselves. These encounters can then become moments within the duration of an exhibition in which audience might alter or complicate the conversation, and in doing so potentially display an agency that reveals the power of inter-subjective interaction and problematic nature of gallery space. In his essay Response: The People, The Multitude and the Costs of Privacy in South Africa’s Post Colony, Andrew van der Vlies asserts the importance of questioning the “infrastructures of cultural mediation,” and discusses how apparently openly ‘public’ spaces for ideas and their discussion are rendered private through various institutional assertions of class (van der Vlies 2013: 497 – 502).

Bosenberg sees her works as translations, in so far as they carry an empathic feeling of the stories of each interviewee, yet cannot and should not assert a complete understanding of each narrative (Benjamin 1969: 69 – 82). Operating as the filter through which the art is made, Boseberg conveys the freedom of imagination as a powerful tool to seek out a meeting with other narratives.  With the completion of these soundscapes and ‘poetic speeches’, this play of translation is expanded into the new ‘public’ spaces of the sidewalk and the mall. Within these new spaces, Bosenberg meets the challenge of pushing art into securitized and privatized common spaces. Significantly, Bosenberg typically needs to navigate various bureaucratic channels in order to make this assertion of commonality, and by extension justify commonality and the meeting ofhnfrkkvGT private / common space (van der Vlies 2013: 496 – 497). Such assertions require repetition. It is through such repetitions that Bosenberg aims to trigger reflection upon the value of art as a common vehicle for communicating stories.