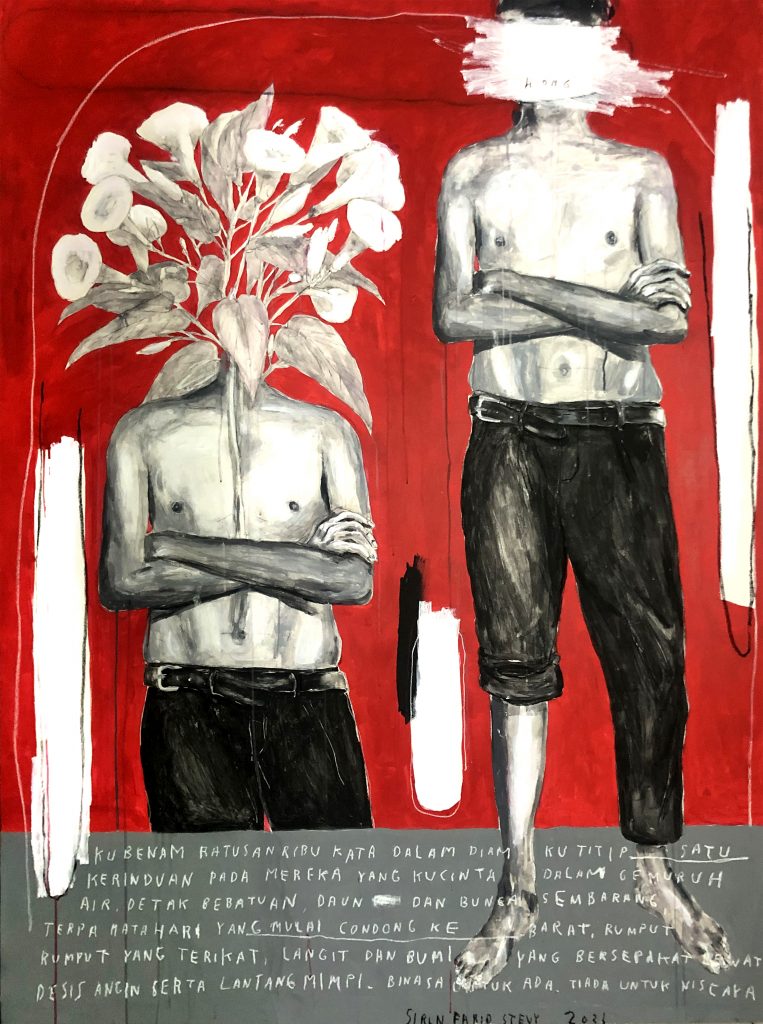 The assassination of six Indonesian army generals on the 1st of October 1965 gave rise to the accusation that the Communist Party of Indonesia (PKI) was behind the plot. Under the pretext of securing orders, the military under Soeharto arrested all members of PKI as well as those accused of being communists. In addition, the military government restricted press publications to control what people read.[1] They developed propaganda about the collective responsibility of the communists. In the end, they published a white paper penned by Nugroho Notosusanto, Director of the Historical Centre of the Armed Forces, to reaffirm their version of the events.[2] To ensure their version of history, the regime made educational institutions to be at the forefront in instilling knowledge about the so-called History of the coup d’état in 1965. Until the present, the history curriculum prepared by the government of General Suharto was the sole public reference.[3]

The Project: Faith In Speculations

Faith In Speculations (FIS) is an ongoing oral stories project that has recorded the testimonies of the 1965 political genocide’s survivors and their families as well as individuals who witnessed the tragedy. The project has amassed a collection of more than 70 audio and video interviews, thus trying to display a series of personal narratives using an interactive map of Indonesia specially developed to plot historical instances of violence and unrest in the 1965 political genocide.

These testimonies provide invaluable historical information that can be used by future generations, social scientists, artists, and concerned citizens. The scope of the collection encompasses testimonies, personal documents, memorabilia, and archives. Using an interdisciplinary approach that brings together contributors spanning the fields of art, history, social and political science, and software design, this project explores and maps individual and collective memories.

The military regime has dominated Indonesian History until today. Therefore, this project aims to present alternative narratives and to piece together an investigation of Indonesian History in order to have a better comprehension of the 1965 mass killings. The timemap presents the struggle events and personal narratives in the Archipel as well as in other countries related to the communist purge in 1965-66. We thus visualize these oral stories through mapping and interactive technologies.

Our research shows that the survivors and their families still suffer from stigmatization as a threat to the nation and political pressure. Hence, this project is willing to center these experiences to address rehabilitation of rights and encourage reconciliation. 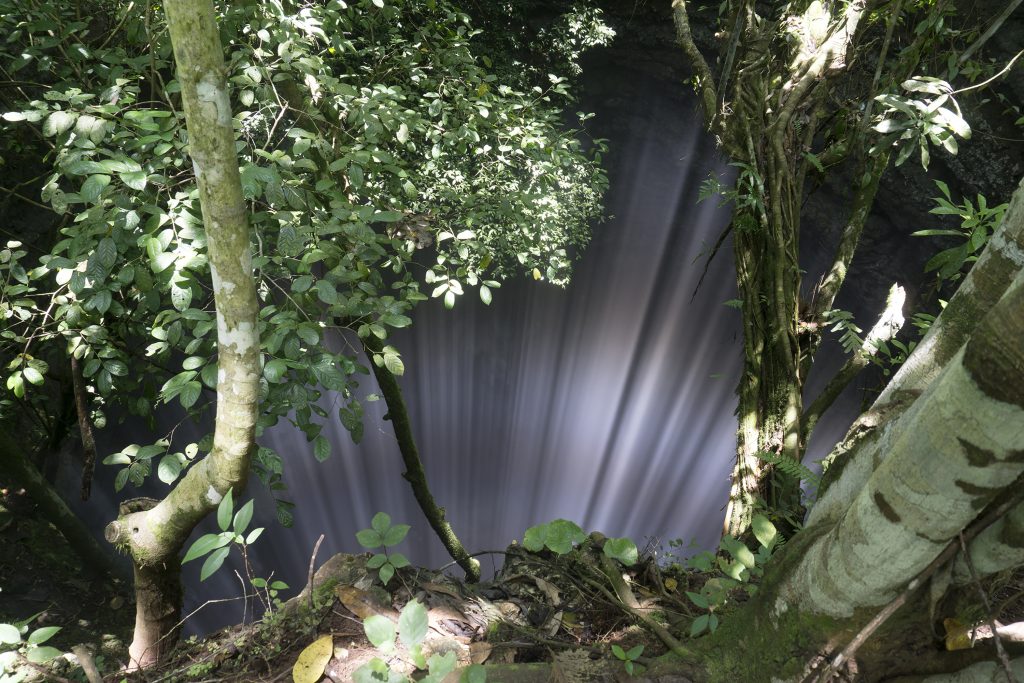 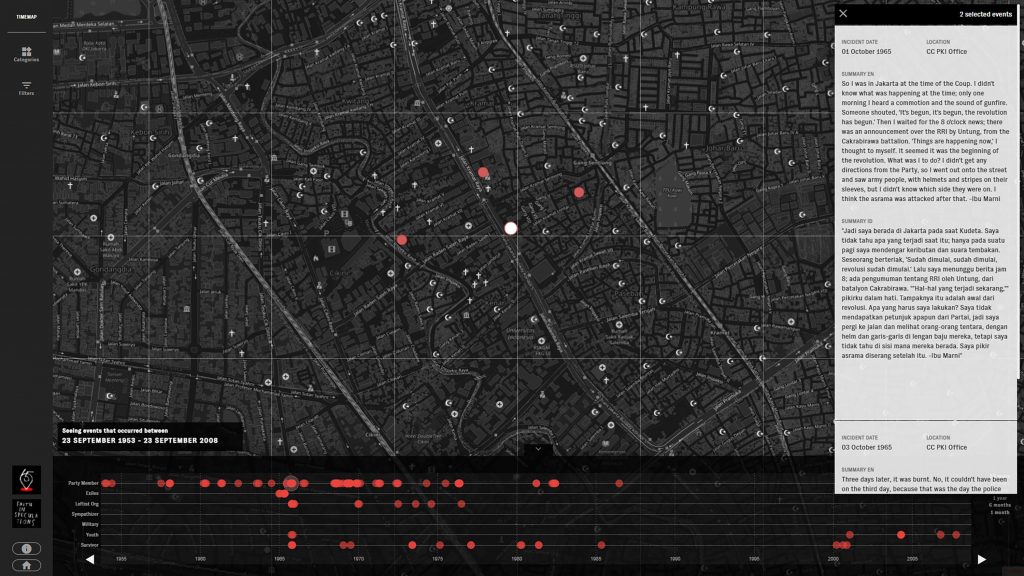 The role of oral stories: Why is it essential to record them?

As time grows short for the survivors of the 1965 political genocide and individuals who witnessed the tragedy, the need to record their accounts of this period is exigent. Recognizing the urgency of this situation, the FIS has stepped out of its collecting efforts. The oral stories documentation initiative is designed to prevent the irretrievable loss of an invaluable historical and identity knowledge source. Moreover, the project seeks an in-depth account of personal experience and reflections, with sufficient time allowing the narrators to give their story the fullness they desire. As in that program, we are not solely interested in the documentation for its own sake—instead, we intend to create a melting pot of memories that can be a reliable reference for the public as well as the survivor communities to learn about their oral histories directly, now and in the future. Therefore, the FIS asks that anyone who lived through this period and witnessed the tragedy share their memories, documents, or memorabilia (objects, photos, sketches, etc.) to archive their stories.

Since the mid-1980s, oral historians have increasingly examined language as the invisible force that shapes oral texts and gives meaning to historical events.[4] In addition, oral narratives recordings provide valuable first-hand testimony of the past. The narratives and views expressed in oral stories are those of interviewees, who described the events from their own perspectives. Their language, word chosen, tone, and content might, in some cases, reflect socio-political situations at the moment that may lead to an alternative version of (Indonesian) history.

The use of digital technology: The revolution in the landscape of oral histories

With the digital revolution in full swing at the beginning of the 21st century, the internet is becoming open source. Digitalization has made sources publicly available and brought research steps only by mouse-clicking. The codebase on the platform facilitates the retrieval of data directly from the cloud database and creates instances to projection as an interactive cartographic platform. The platform is cartography-based, compiled using the data collected and shared by individual and survivor communities, scholars, and human rights observers/practitioners.

FIS’s research model is adaptable to multiple scales and timeframes from the split-second to several years. It is intended as an archive of all the time in a place or story that has been lost in the last decade. Despite experiencing tremendous difficulties in the face of the state’s enormous resources, some people still managed to preserve their memories and build counter-narratives.

The same map can be generated in color-coding for different filters and narratives spatially, situated to document progress on human rights issues and allowing practitioners and the community to respond more effectively.

It also calls attention to the political urgency of this ongoing memory erasure and aids militant research and action by delineating these problems. By mapping, the conflict situation of history is situated within its context. One map can provide a powerful visual representation of the spatial dimension and its impact over time.

The Approach of Process

For more than 30 years, the military government under General Soeharto forbid any work that proposes a different version of Indonesian history. Consequently, the memory of the events of 1965 seem to have no place in Indonesian society. Until today, Indonesian historiography is still struggling with a lack of sources. Therefore, to find alternative narration of the history of the events of 1965, this project includes the stories of families of former political prisoners whose lives are affected by trauma and discrimination which sometimes challenge their capacity to elaborate their stories.

We disseminate content through our social media channels and networks of support organizations to expand its coverage. Users can be engaged and mobilized through “participatory mapping.” In a broad sense, participatory mapping refers to maps that the user has contributed their narratives. One way of engaging the community is to use existing maps and add elements that the user finds useful. By building on such maps, the user can create its mapping resources tracking specific issues in several areas at once and over time. Through this experience, users gain ownership over the issues at hand and have a chance to acknowledge their own experiences and utilize their local area knowledge. However, it is also important to highlight that FIS is always concerned about the possibilities that will occur in the future as an information platform. For this reason, the methodology is developed to protect data and prevent data privacy misuse and security breaches. 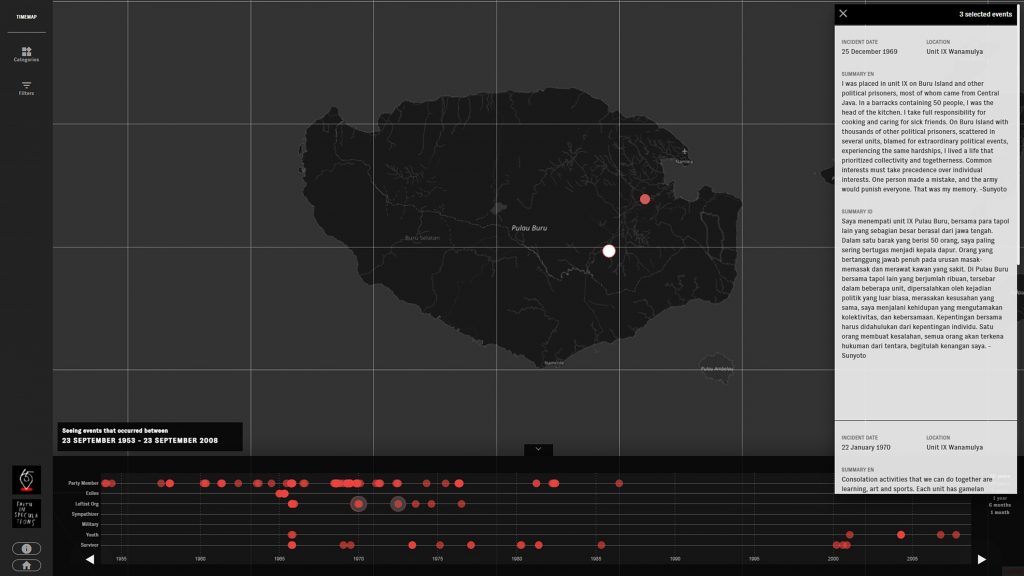 Rangga Purbaya is a visual artist interested in collective memory, narrative, archive, and history of the 1965 genocide in Indonesia. He graduated from the Photography Department in the Indonesia Institute of the Arts and member of Ruang MES 56, artist-run space and collective focusing on the development of photography and contemporary art, crossing over with other disciplines in critical and contextual approaches. His work integrates different mediums, such as photography, text, mix-media, video installation, and performance. http://ranggapurbaya.com

Sirin Farid Stevy is a visual artist, graphic designer, and singer-songwriter in FSTVLST (festivalist) based in Yogyakarta, Indonesia. He graduated from the Visual Communication Design department in the Indonesia Institute of the Arts, Yogyakarta. Intergenerational communication, Popular Culture, Identity, and history are his main interests. Through his visual art, graphic design, lyrics, and music performance with his band, Farid spoke to his young audience about equality as a response to socio-cultural discrimination and stigmatization issues. http://faridstevy.blogspot.com/

Debby Gea is a systems architect with twelve years of experience in information technology for several banking and telcos. She holds a bachelor of physics from the University of Indonesia and currently takes a Master of Science in Computer Engineering. https://bit.ly/debbygea

Pujianto Kurniawan is a programmer, and he holds two degrees from the Informatics Engineering program and Statistics, both from IST AKPRIND. He has attended various training, including junior programming and Delphi programming training at Gadjah Mada University, Yogyakarta. From 2009 – 2021 he developed the Jogja biennale foundation website and the Indonesia Visual Art Archive archiving system.

Shienny Selianto is an NGO officer and independent researcher, based in Yogyakarta.