This project is part of a theoretically and practically grounded work that reflects a confrontation with a violent past—the one of Iran between 1979 and 1988. This socially and politically tumultuous period is situated between two decisive moments: the 1979 Revolution; and the massacre of the political prisoners in the summer of 1988. This period was also marked by an eight-year war between Iran and Iraq. Reflecting the effects of state violence within different social groups and in public space in Tehran, this practice-based research is structured around three main cartographic works—all of which belong to the broader project Geography of Destruction. 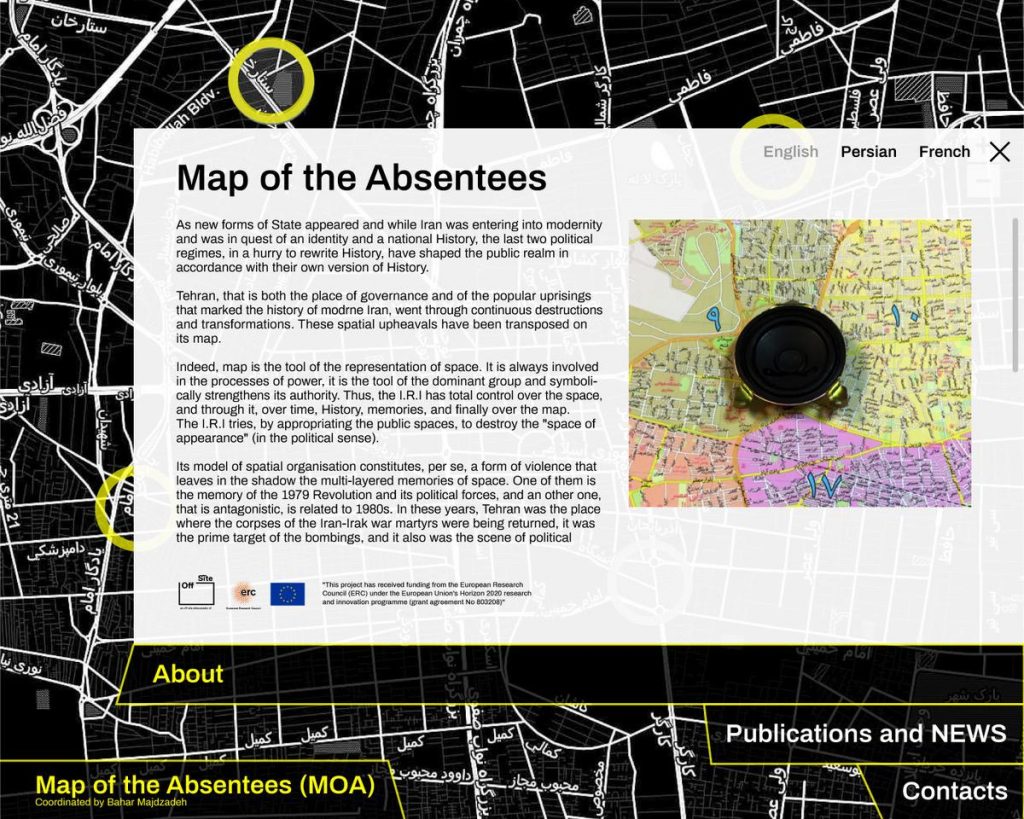 Map of the Absentees (Geography of Destruction, map n°1)

The absentees refer to the militants of different political currents who were involved in the revolution against the Shah, and who later opposed the new repressive Islamic regime. Consequently, in order to stay alive or to continue their political struggle, they had no choice but to leave their country. Scattered all around the world, nineteen political refugees whose exile originated in episodes of political violence that occurred between 1979 and 1988 have participated in the creation of this map (a website and a sound map). Each voice tells a memory of a specific place in Tehran and then broadcasted in precise locations indicated by the political exiles on an actual map of Tehran.

For further reading about this mapping:

“Topography of the absence of the Iranian political exiles”: https://hal.archives-ouvertes.fr/hal-03320906 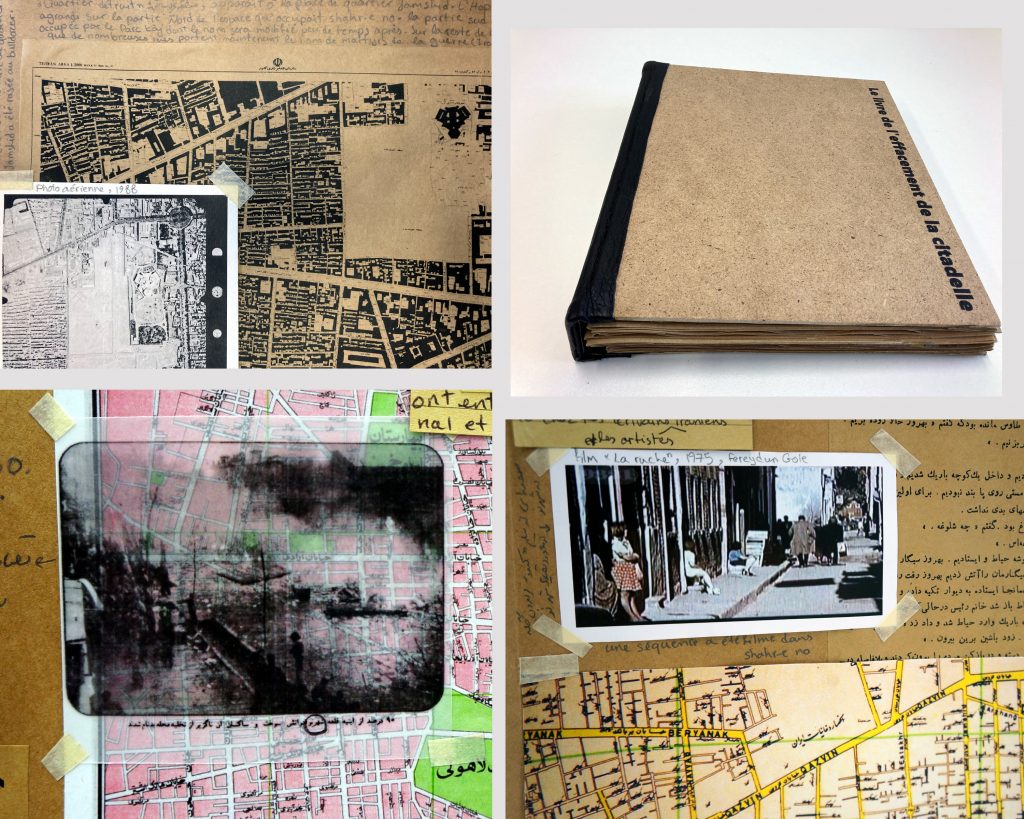 The citadel of Shahr-e No (the new city), which was the largest brothel of Iran, was set on fire shortly before the end of the Iranian Revolution, on the 29th of January 1979. The fire of the citadel was followed a few months later by its total destruction. Ten years later in the summer of 1988, this destruction continued when the Islamic Republic erased the Jamshid neighborhood where the citadel was situated. Maps, recent or on the contrary very old, dating from the middle of the 19th century, when Shahr-e no didn’t exist yet, were gathered in the Book of the Erasure of the Citadel. In reading of these maps, together with texts, evokes an understanding of how this place changed—from the time it appeared and expanded, until it eventually disappeared.

For further reading about this book:

The Cartography of the Invisibles (Geography of Destruction, map n°3)

During the 1980s, right after the 1979 Revolution, a politicide occurred in Iran which lasted seven years. It is still unclear exactly how many thousand political activists perished at this time. The last step of the 1980s politicide was the massacre of political prisoners[1] around July 25, 1988—one week after Iran accepted the United Nations Security Council Resolution 598 (S/RES/589) which put an end to the eight-year war against Iraq. There are very few official documents mentioning this unknown mass murder, but a lot of testimonies from the families, the survivors, and the political militants have been published, mostly in Persian, outside the country. Until a few years ago, discussing this event has been a taboo in Iran, and it is still today the subject of silence and denial. This cartography seeks to map the route taken by the families of the 1980s executed political militants between Tehran and Khàvaràn.[2]

For further reading about this cartography :

[1]For two months, more than 4,000 political prisoners were executed in silence throughout the whole country.

[2] Khàvaràn is a piece of dry land situated next to the Armenians and Hindus cemetery and about 25 km Southeast of central Tehran. The I.R.I. calls this place the ‘damned land’ (la’nat àbàd in Persian). The families call it ‘Khàvaràn, the field of flowers’ or just Khàvaràn. This is the place where the regime buried the corpses of the left-wing activists of the 1980s that they had executed in Tehran area in both individual and common graves.