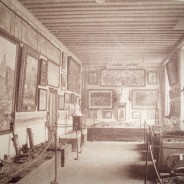 How To Steal A Million (Marta Jecu)

sean January 3, 2013 February 1st, 2014
At its core, this project is based on William Wyler’s 1966 film “How to Steal a Million”, in which an art theft is staged inside a Paris museum. The plot reflected a new spirit and  a performative, rebellious dynamic in treatment of the Masters – both institutionally and artistically. From a museum stuffed with fakes, a thief successfully steals his own forgery, and consequently reveals the hollow prestige of the museum’s revered masterpieces: a “Classical” Benvenuto Cellini is substituted for a bottle of brandy, and the technology of the latest surveillance system is tricked with a boomerang.This project takes the form of  a series of museological performances in which contemporary art might challenge the borders of static display. Six artists will be invited, for a one-night show, to reformulate and re-interpret a museum’s display of objects, effectively inserting their own work alongside the existing display. The remains of these performances can then be kept by the museums as temporary exhibitions.

Just as the seductive performance of the two thieves in “How to Steal a Million” unveiled issues connected to value attribution, and also imported new movements and ideas into the restrictive spatiality of the museum, the participating artists will reveal the latent temporality of the objects of display, effectively deconstructing – with a contextual gesture – museological construction.

The project will also allude to another key aspect of the William Wyler film – the fiction of a new and rejuvenated museum that comments on the power of media. The fixity of the dusty architectural abode of the masters is brought back into circulation through the mobility of the film – effectively infusing it with “the real” – that is bringing the immediate and ethically dubious presence of the outside world back into the museum. Significantly, there is also a subtle differentiation between the anarchic but professionally impeccable actions of the thieves (transmitted via film) and the outdated (although technically equipped) incorporation of tradition in the architecture.

Working in this mode, this series of one-night performative interventions will occur in different countries and museums. Artists will be invited to explore the territory between the relentless architectures of established institutions and the performative pluri-medial possibilities of interventions within them. In introducing a “foreign eye”, artists will be invited to experiment with historical transformation across past and future. The first stop in this nomadic project is Lisbon, a city containing genuine “museums of museology” that carry a particular material presence due to their modalities of display and the proximity of the viewer to objects of display.

Stay tuned to Project Anywhere for updates as they occur during 2013.