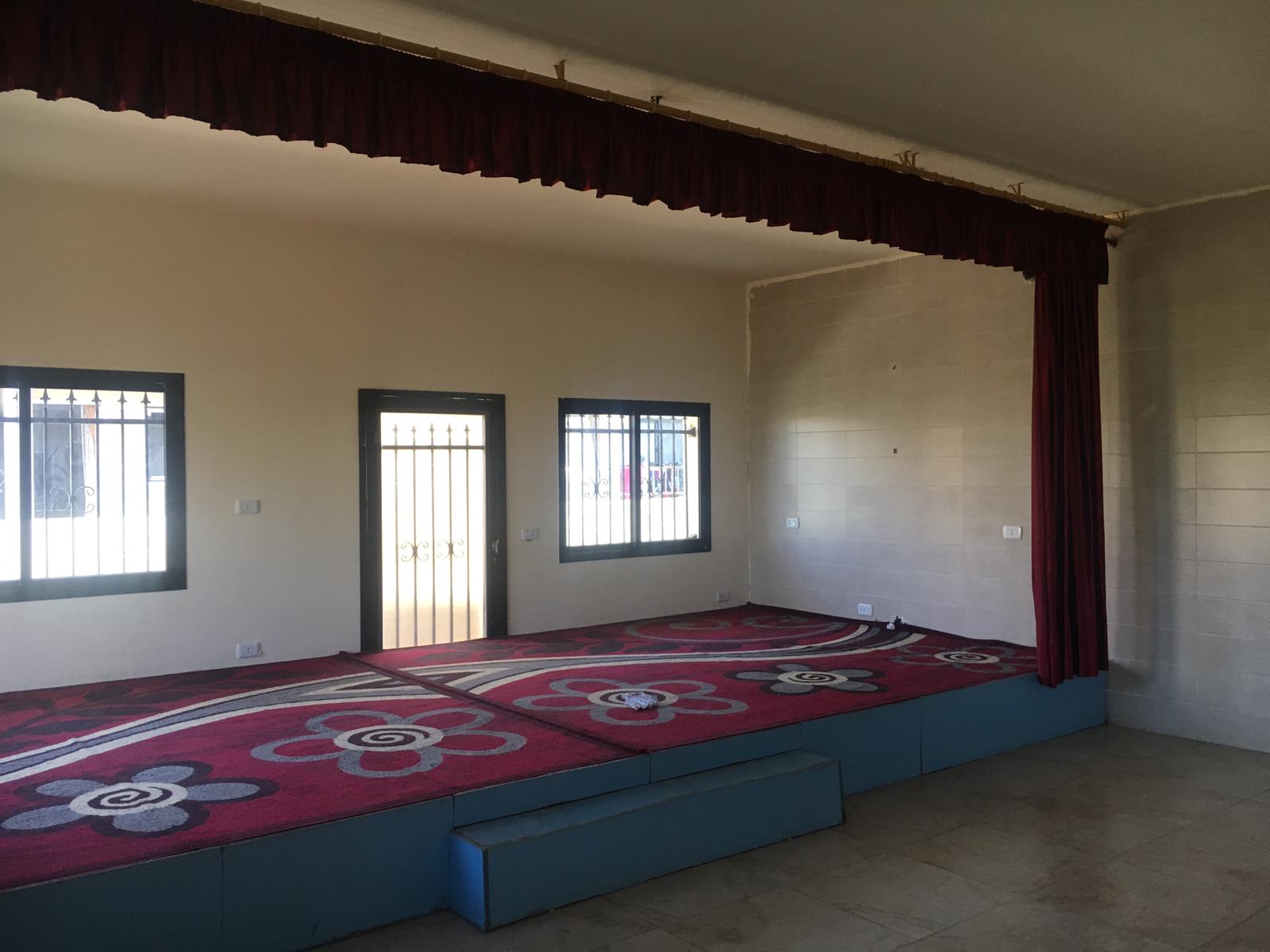 Dima Mabsout, Classroom and Communal Spaces, 2019. The youth groups use these spaces during the accelerated education programs. Located in Bar Elias, Lebanon, managed by Sawa for Aid. Courtesy the artist.

The Museum for the Displaced (MfD) is a cultural and social organization addressing issues of forced migration, displacement, and statelessness. Its arts program, unfolding over multiple geographies and contexts, aims to renew possibilities of solidarity and the demand of fundamental rights for disenfranchised groups of displaced people in situations of risk and distress. Through contemporary art, critical discourse, and action, we aim to address and bring attention to issues of forced migration, displacement, border politics, and intercultural identities, developing a translocal network and community. A transdisciplinary effort, the MfD brings together artists, curators, researchers, and thinkers to collaboratively examine the present situation and imagine and enact possible equalities.

Using art as a tool for alternative education and growth, the ultimate objective is to impact change and create opportunity in the lives of those affected by forced displacement. With a logic of redistribution, the idea is to take advantage of the established international networks of contemporary art as a leverage to create value and opportunity in disadvantaged elsewheres, and give visibility to silenced voices. This project is collectively founded and managed by four curators: Canan Batur (Istanbul/London), Mohammad Golabi (Tehran/New York), Leong Min Yu Samantha (Singapore), and Ana Sophie Salazar (Lisbon/Singapore). We aspire to a culturally rich world, where respect and sustainability are the core values when developing policies; an egalitarian world, where differences are embraced and celebrated; and, most importantly, a world where a call for solidarity and collective action is heard.

The questions that underscore our intentions, methodologies, and praxis, are: How to always ensure that the value we give is equal or more than the value we gain? How to make a real impact? How to activate the capacities that already exist? How to translate the experience of displacement? How to safeguard and allow for conditions of dignity for all living beings? How does MfD’s structure of museum respond to our needs and concerns? How to act without falling into the dominant “charity” structure and without reinforcing and reproducing what we stand against?

The MfD will be constituted in three acts: the Multitude, the Plays, and the Chronicles.

Through commissions and donations of artworks, invited artists and collectives become part of the Museum, endorsing its mandate. Following similar calls to action in the past, for instance the Museo de la Solidaridad Salvador Allende (1971) or the Museum against Apartheid (1983), the MfD believes in the inspiring, empowering, and revolutionizing agency of art as a vehicle and tool for political and social action. The gathered artworks form the Multitude, a base for a sustained discourse, contributing to the identity of the Museum and enriching its educational potential. They can also be incorporated in external projects, becoming a resource for curators and artists. As a nomadic initiative, the Multitude will explore possible formats of managing a collection of artworks without necessarily having ownership over them.

The itinerant program is supported by partnerships in the different localities and includes expositions, assemblies, ateliers, and residencies. The MfD, being a nomadic project, acts as a catalyst for other institutions, art spaces, and organizations to put together art programmes in various formats.

EXPOSITIONS The expositions are curatorial displays of the MfD. The term exposition is used, as exposing is linked to being vulnerable, while exhibiting is an act of imposition. Exposing is a gesture towards laying bare, becoming visible, and opening up. An exposition is also the first section of a plot, therefore the artworks and narratives prompt the audience to unfold the open-ended storyline themselves.

ASSEMBLIES Fostering togetherness, the assemblies convene people from various disciplines and backgrounds to discuss the identified issues. Invited artists, curators, researchers, scholars, philosophers, political scientists, and other practitioners will expose current urgencies and collectively envision and practice a possible future. These assemblies shape the MfD through a horizontal structure, which values subaltern and silenced voices.

ATELIERS The MfD will organise workshops and community projects in partnership with non- profit organisations and grassroots movements. The Ateliers offer a space of facilitation, engagement, and education.

RESIDENCIES In accordance to the different projects, the MfD will provide residency opportunities for artists, writers, and curators.

The Chronicles are the vertebrae of the MfD as institution. It includes all the publishing activities in online and offline formats. Part of the online content will be the documentation of all MfD’s initiatives, making the entire archive free and accessible.

There are many organizations and NGOs in Lebanon that have been working to provide education and support to Syrian refugee children over the years. Most of these schools and setups are informal spaces and curriculums, that do not lead to official diplomas, but instead offer safe, supportive social spaces that help children have structure in their day to day life. Other schools work closely with the Ministry of Education to integrate children into the Lebanese curriculum leading up to official diplomas. Often, informal schools, despite the lack of institutional recognition, are preferable spaces for the children because they are designed to support the children socially, psychologically, culturally. With informality comes the flexibility to adapt and respond to the lived experience rather than the standardized.

The children we will be working with are a group of youth (ages between 14-18) that have dropped out of formal school for different reasons and are now enrolled in accelerated programs led by Sawa for Aid, where they take classes in reading and writing, basic math and science, computer literacy and other vocational skills. All these children are Syrian refugees, but root from different ethnic backgrounds (including Palestinian and Kurdish). Such minority groups are the most at-risk populations with least support available. The hope is to reintegrate them as active members of the community.

We would like to work with these children for the opportunities we can offer, with the hope that it can contribute to their well-being, motivation, and general outlook to learning, education, and community participation. We will be working with 80 students, four classes of 20, over a period of at least four months. They will receive a stipend for participating in the work for the research they will conduct and community contribution they will pursue.

The idea is first to engage the youth with their surrounding environment and come up with materials, motifs, and stories from which we form performances (theatre, parades, etc.) The performances will also inspire a structural intervention (for instance building a playground, community space, mural, etc.).