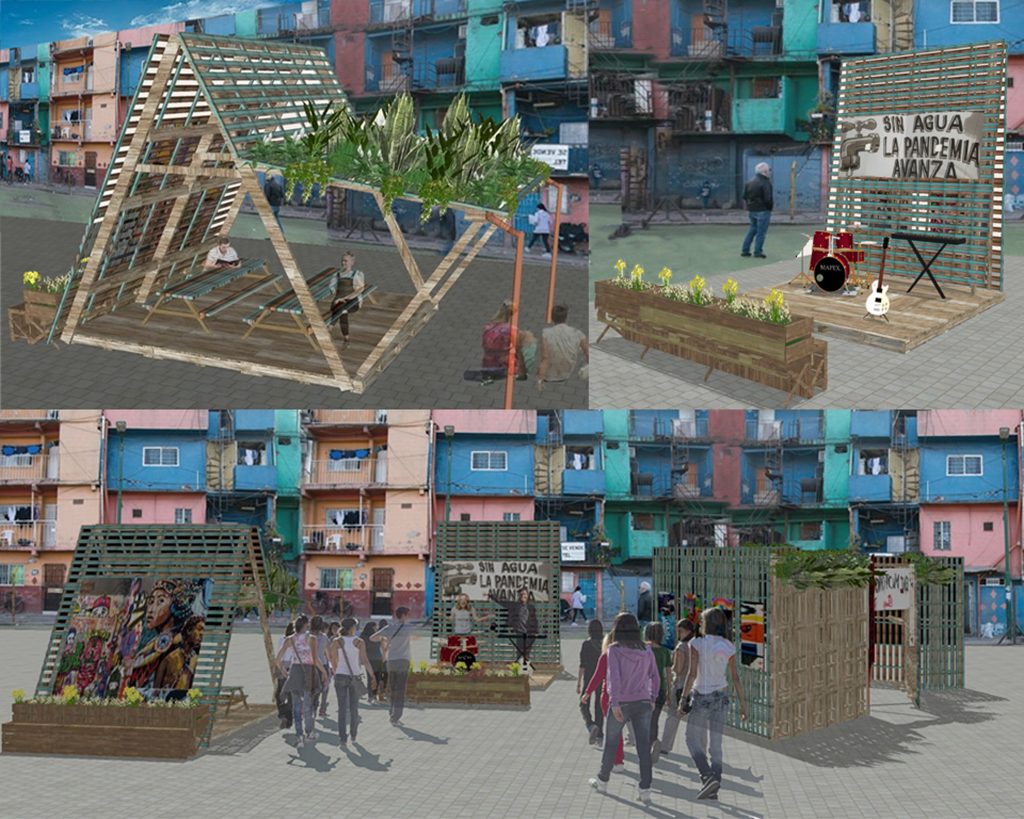 Nucleus for Change proposes a paradigmatic shift of the Western epistemic thought by understanding the slum as nucleus for knowledge production rather than a marginal place settled down on the peripheries of metropolitan cities. This new perception considers the slum as a central source of knowledge and cultural heritage for humanity. The research begins with studies on decolonial epistemologies from the Global South perspective and it continues with ongoing artistic explorations, such as participatory performances on-site. This project attempt to de-link1 our thinking process from Western Modernity and highlight the cultural identity of the marginal neighborhood as a decolonial action. The main methodology for this work is the notion of Multipolarity2—a way of thinking and doing that comes from the concept of “Sumak Kawsay” (or “Living Well”)3—a term borrowed from Andean’ Indigenous cultures in South America. Nucleus for Change tends to make visible the favela’s cultural background through the act of re-existence4 at the margins as autonomous centers of knowledge production. Here, the term re-existence offers an alternative to the use of the term resistance by seeking to carry out an action from the margin towards the center. Significantly, this process of re-existence creates a new form of integration and autonomy of the peripheries by revaluing people’s local cultures. Nucleus for Change does not attempt to reinforce the resistance but to rather to reinstate the relevance the local culture through the act of re-existence. For this ongoing project, re-existence will be achieved by attributing new values to the sub-culture of the neighborhood, and in doing so, reinforcing its strengths as a community through artistic explorations on-site. Consequently, different types of participatory performances will be organized in collaboration with inhabitants and then presents under the name Nucleus for Change (Fig. 01).

“Villa 31” is a famous slum next to the Port of Buenos Aires, Argentina, a place which had been subject historically and since its origins of displacements from Spain, Italy, Poland, neighboring countries such as Bolivia, Paraguay, Peru or even migrations from different provinces of Argentina. These working-class settlements next to the Port of Buenos Aires once promised a future integration with the city center, but due to the crisis, lack of job opportunities and constant discrimination, migrants instead accumulated over time in ‘Villa 31’ without hope of integration with the city. This slum, which is in the southern area of ​​the metropolitan Capital of Buenos Aires, took this name because it began to be considered a neighborhood in 1931, despite not being recognized as such until 2016. During the dictatorship in the ‘70s, there was even a plan for the eradication of the slum. Ultimately, Buenos Aires has spent decades pretending that “Villa 31” doesn’t exist. Right wing parties even tried to place a vegetable curtain to hide it from the cars passing by the highway that cross the middle of the slum located between the Port and the Main Bus & Train Station of the Capital. Today, more than 40,000 people live there; double the number of 15 years ago. After 80 years of illegality the city council decided to turn it into another neighborhood in 2016, subject to many controversies. Since 2018, “Villa 31” began to be urbanized.  Property titles were given to residents, and some 9,000 homes were slated to be improved, whilst another 1,000 were selected to be destroyed—especially those that sprout under the road and bridge. Consequently, “Villa 31” is subject to renovations and rehabilitations, which necessitated the evacuation of thousands of people and the relocation of some in State buildings. In these evictions the neighborhood resist and the police forces and machinery have been sent to destroy the houses by force. Many people clearly do not want to be evicted and have therefore produced several acts of resistance against these policies. 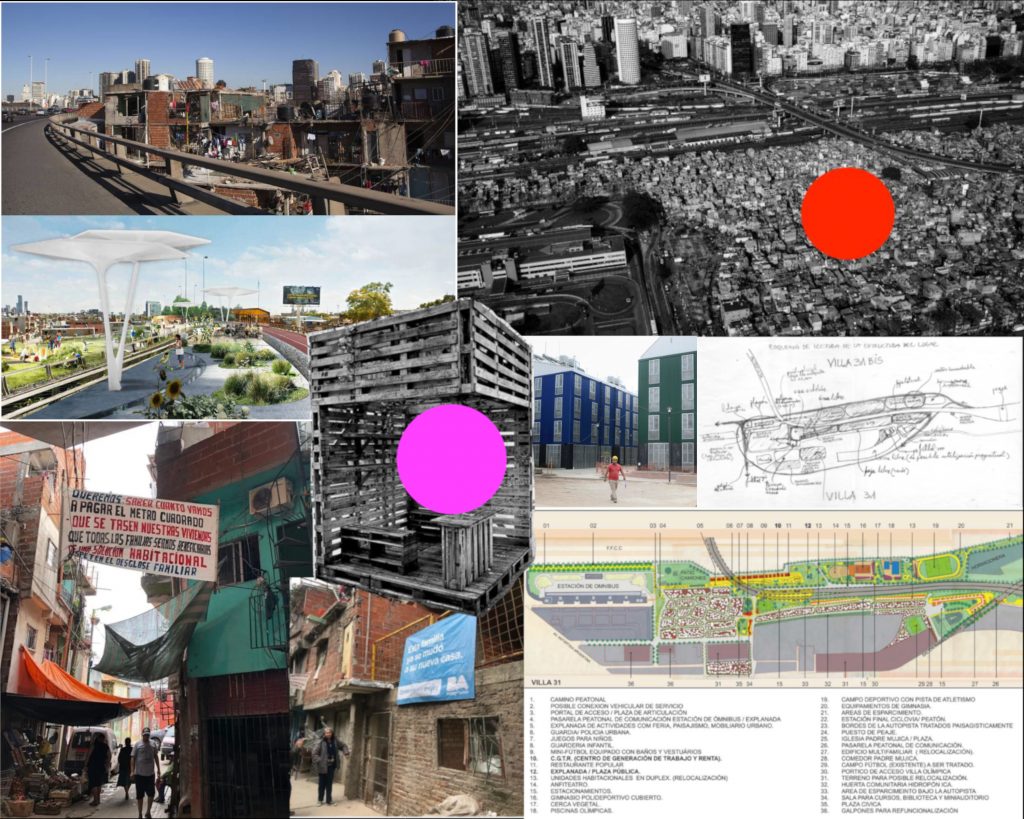 The on-site research will be carried out by using mobile and articulated structures made from pallets situated in specific locations in public space. Importantly, each object embodies different functional faces and will be relocated in different fields within the slum or between the slum and the city center. The pallet structure works as a reminder of the main characteristic of this area—that is, a workers’ settlement next to the Port of Buenos Aires. The physical structure of each pallet is articulated according to the purpose of the research activity, and can be used as a stage, library, art gallery or even as an art workshop. These mobile and articulated structures of pallets will be located and then relocated within various public areas neighborhood with a view to recovering the neighborhood’s identity and cultural background. The implementation of this research on-site will expand the knowledge of previous decolonial studies from the perspective of the Global South by working through artistic explorations and practical applications of decolonial methodologies such as “multipolarity” and “living well”. Nucleus for Change’s participatory action will take place between 2022-2023 starting in “Villa 31” Buenos Aires, Argentina. In these participatory art workshops, people are invited to express themselves by playing music, doing arts, poetry, crafts, or any other type of creative work. One of the specific chosen areas for this intervention, for example, is called plaza “Containera”—a term referring to the containers were placed there before the rehabilitations from the City Council between the years 2015- 2019 (Fig. 02).

The research process is based on the methodology of multipolarity5—a concept drawn from Indigenous Studies in which the nascence of a multipolar world is understood to consist of multiple nucleus of equal importance regarding knowledge production. As anthropologist Tirso Gonzales puts it: “[a] multipolar world is rooted in and it emerges from the people’s local practices within diverse place-based cultures across the Globe.” For Gonzales, the term “living well” (“Sumaq Kawsay” in Quechua) has become the conceptual centerpieces of ascendant Indigenous social movements that encourage a Latin American polycentric perspective as an alternative to Western epistemologies. In this sense, multipolarity offers a de-colonial6 counter to Western dualities such as Center/Margin, Developed/Undeveloped or First/Third world classifications. In this sense, the regeneration of ‘Sumaq Kawsay’ as a new geopolitical, cultural, and polycentric world is examined through the decolonial practices of Indigenous Andean community-based people, especially farmers, as Bonaventura De Sousa Santos describe on his book Epistemologies from de South.7 Therefore, from the Indigenous Andean Community’s perspective, this new polycentric world is not anthropocentric or bipolar but rather a ‘pluri-local’ scenario that encompasses a nurturing, respectful and reciprocal relationships between people and its local culture. The spread of many local cultures around the world will make the Global a Glocal8 scenario.

1 Walter D. Mignolo. Delinking: The Rhetoric of Modernity, the Logic of Coloniality and the Grammar of Decoloniality (2007).