A speculative response to living with death and dying 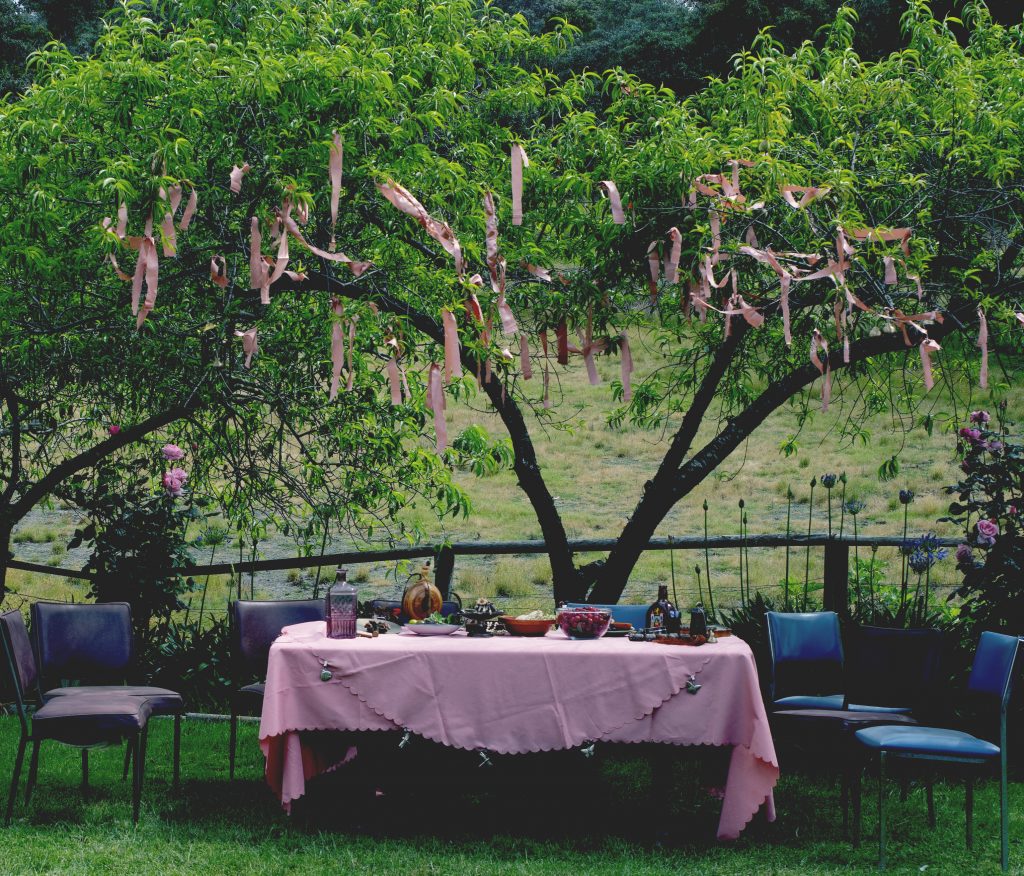 There is a Dead Rabbit Under the Greek Family Unit, 2021.
Live action, documentation, Wattle Glen, photo by Tina Stefanou.

We need affirmative,[1] non-nihilistic ways of living with death, dying and elderhood. Because death and dying are ineluctable in the ecology of life and living. [2]

Planet Hospice 2021-2061 is a 40-year project that responds to this need, conceived and led by artist Tina Stefanou. In each year Stefanou will invite makers, carers and thinkers to participate in process-oriented, speculative social practices that generate relation-research-creation.[3] Organised and exhibited in situated, virtual and potential spaces (see below).

Planet Hospice is not a care facility or public service provider. It engages these environments through thoughtful and experimental creative practice. Its activities include a death salon, collective writings, cross-disciplinary making, thought experiments and events.

A note on the 40-year timeline. This reflects the artist’s anticipated period of ageing into the generative phase of her life. Aspects of the project will change from year to year. People will remain or fall away. Ideas will emerge unforeseen, others will fade. The project will move along a relational axis, guided by its collaborators, by its ethical orientation, and sustained by an enduring need to live with death and dying.

Planet Hospice traverses multiple epistemologies and death practices, weaving with non-Anglo perspectives from within its project community, theoretical perspectives from diverse thinkers more broadly, and in direct response to its geo-temporal location.

The artist currently lives on 20 acres of Wurundjeri land in Wattle Glen, where she has been undertaking multi-species living-dying relation-research-creation with horses, other animals, and members of her family for several years. The peri-urban site in Wattle Glen provides a geo-temporal ground to materialise (in concept, performance, and installation) several of Planet Hospice’s speculations. Note that the situated space may change over time.

Spanning 40 years, and including multiple more-than-human lifetimes, Planet Hospice anticipates finding expression in as yet unknown examples, housed alongside its current plans in parallel potentia. From these unknowns the project welcomes unforeseen tendrils of relational creation. 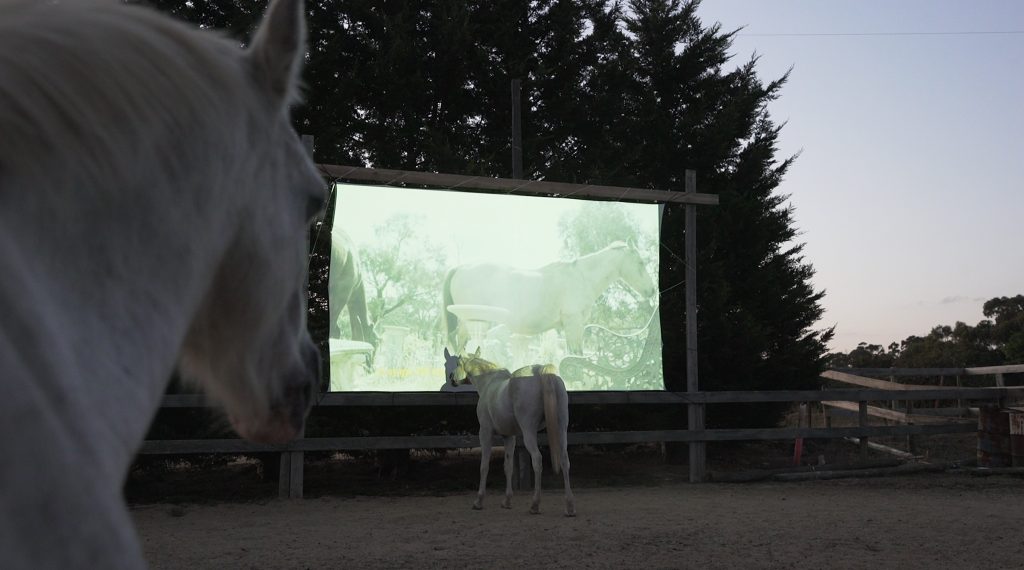 Planet Hospice is guided by an ethical orientation that aligns with Braidotti’s affirmative ethics and Levinas’s notion of being for the other. Both value diversity, and caution against normative approaches based on transcendent rules or guidelines. In other words, both value an ethical orientation that is generated in the act of living. Like Braidotti, we seek to affirm multiple ways of being in our work, which we acknowledge is often challenging and exhausting. It requires us to remain continually engaged in an uncertain process and avoid any impulse to proclaim a moral imperative. This is not the same as moral relativism, which is merely another universal, but rather a commitment to openness. And also, to duration, “both in the temporal sense of continuity and the spatial one of endurance”.[4] We also recognise, like Levinas, that encounters with otherness helps to extend our sense of responsibility beyond the self.[5] This is in contrast to the neo-liberal perception of otherness as a threat to self-reliance. Though we appreciate the need to respect certain boundaries for the sake of safety, we are critical of neoliberalism for its failure to embrace otherness and to acknowledge that interdependence, not self-reliance, is essential for sustainability. Faced with death and dying, we see a responsibility to befriend and extend our care, rather than protect ourselves.

Our approach in year one is to gather and express our thinking in ways that reflect our diverse skills, knowledge, and perspectives. Our intention is not to arrive anywhere. Not to find any certainty or be prescriptive about the conditions of others. Our aim, aligned with our ethics, is to contribute our approach, and thereby generate new knowledge alongside existing thought in critical post-humanities, death studies, ecology, multispecies performance, architecture, health, economics and social science.

We find traces of death in our bodies, our familial relationships, our domestic experiments, in the catastrophe of now-visible climate change, in reckoning with colonial inheritance, in our love for the present, in our care. And in thinking about death, we orient ourselves by the following suppositions:

The Grandmaocene: When I Die, I Want to Come Back as a Garden, 2020.
Live action, documentation, Wattle Glen, photo by Tina Stefanou.

Tina Stefanou is a Greek-Australian artist with a background as a vocalist. She is currently based on Wurundjeri country in Victoria. Tina works undisciplined, with and across a diverse range of mediums, projects, practices, approaches, and labours: an embodied practice that she calls voice in the expanded field. Tina has performed and exhibited locally and internationally. She is currently a PhD candidate in Fine Arts at the Victorian College of the Arts, University of Melbourne.

Daniel Silver is a Jewish-Australian writer, counsellor and emerging scholar currently based on Arrente land in Alice Springs. He is a long-time collaborator with Tina, and with his brother Jordan, who is also involved in the project. Daniel’s research interests include post-structural responses to dealing with unalterable conditions in the expanded field of education, which extends to philosophy and psychotherapy.

Jordan Silver is a Jewish-Australian architectural graduate, illustrator and researcher based on Gadigal country in Sydney. His interests include narrative drawing as a means of research creation. Jordan is a regular contributor to the ABC on a range of urban issues and is particularly passionate about small public architecture. He is the founder of Towards Small Things.

Constantine Stefanou is a Greek-Australian emerging scientist, musician and sound artist living on Kaurna country, Adelaide. His scientific research focuses on freshwater and estuarine systems, which flows into his work as a musician and sound artist, exploring the possibilities of data sonification as a tool for science communication, pedagogy, and accessibility to the sciences. Constantine is currently completing his degree in ecology and spatial science at University of Adelaide. He is the co-founder and curator of live art and music organisation MUD.

Siena Jacobs is a Celtic-Scottish-Australian registered nurse working in a large public hospital on Gadigal country in Sydney. She was inspired to join the nursing discipline after finding a passion for working with older persons. Siena has worked in a palliative care ward, nursing homes, critical care areas and medical/surgical wards. She is interested in improving the dignity of death and dying; and culture surrounding this within the medical setting.

Dr Kamil Wolyniec is a Polish, Melbourne/Naarm based medical scientist and clinical psychologist. Kamil has travelled around the globe learning about holistic approaches to mental and physical wellbeing for more than a decade. He did his first PhD in molecular oncology in the UK, followed by 5 years of postdoctoral work at Peter MacCallum Cancer Centre and Deakin University. He is currently finishing his second doctorate in clinical psychology at Peter MacCallum Cancer Centre/Swinburne University, working on the project elucidating psychological distress of patients diagnosed with Carcinoma of Unknown Primary.

Mattie Sempert is an American born, Australian based practicing acupuncturist and creative writer, who received her creative practice-led PhD at RMIT (Creative Writing/Speculative Essay, 2018). Her doctoral research explores the intersection of three practices: creative writing, acupuncture, and process-oriented philosophy. Her book, Sweet Spots: Writing the connective tissue of relation, was published by Punctum Books in 2021.

Manjusha K Sathiananthan was born in India and is an Adelaide based researcher in the field of public health with an interest in palliative and end of life care. Her most recent publication is a qualitative study related to the preference of place of death of patients at the end of life examined from the point of view of healthcare professionals.

These words were assembled and edited by Daniel Silver with Tina Stefanou in conversation with Planet Hospice Year One project team.

[3] Tina Stefanou adds relation to the term research-creation, foregrounding relation as the primary ontological unit. Voicing-in-motion a complex set of relations inherent and inherited in the intensive and extensive curiosities of research-creation. These thoughts are influenced by Natalie Loveless, How to Make Art at the End of The World: A Manifesto for Research-Creation, (Duke University Press, 2019) and Erin Manning and Brian Massumi, Thought in the Act: Passages in the ecology of experience, (University of Minnesota Press, 2014).

[5] Paul Marcus, Being for the Other: Emmanuel Levinas, Ethical Living and Psychoanalysis, (Marquette University Press, 2008).