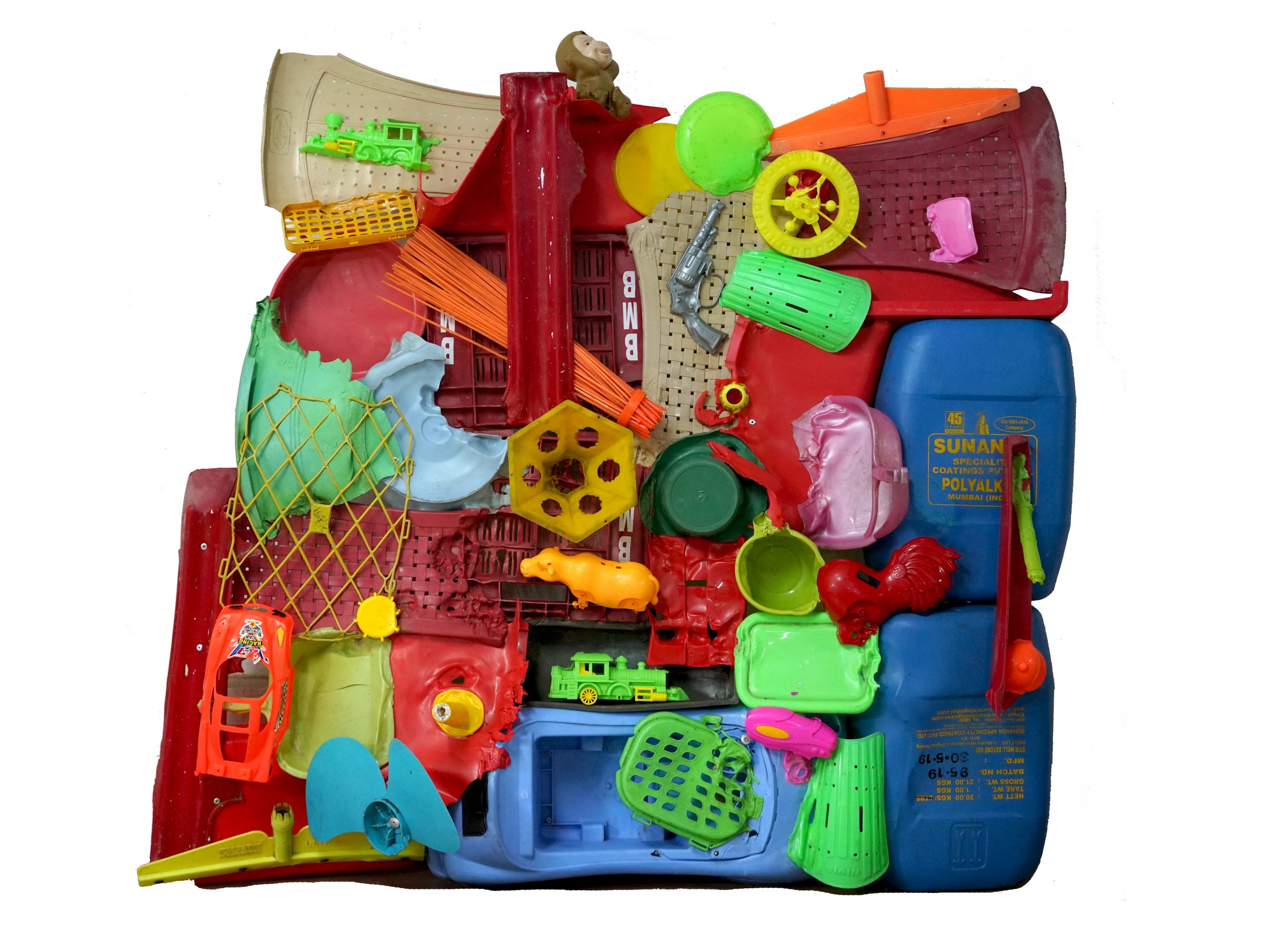 The Palace of Plastic (Plastic Mahal) is a temporary public sculpture and political performance in the mode of a processional ritual that occurs in various sites across the city of Mumbai. The house is built from the city’s waste, which aggregates in the informal recycling centre in Dharavi’s 13th Compound.

The house of plastic is made in the collective mode of self-construction that is visible throughout the informal settlements of Indian cities. Built with and by those of the worker colonies, the house can be seen as a celebration of the livelihoods of all those working in Mumbai’s waste management chain and their handling of the city’s plastic waste. Whilst at the same time, challenge public perceptions of the politics of human disposability, advocating for the work of informal recyclers as essential and valued labour within wider systems of production.

The co-design and co-creation process takes place at the Compound 13 Lab, working with young people to explore issues of work, waste, survival and their social and political contexts. These issues are then enacted through the role of ritual and performance as dramatic means of collectively taking action, personal expression, instilling solidarity and creating visible issues that lie beneath plain site.

The project interacts with the lab by connecting recycled plastic to 3D printing workshops. Plastic objects created by the lab’s young members using 3D printing, extrusion machines and 3D printing pens will be added to the façade of the temple. 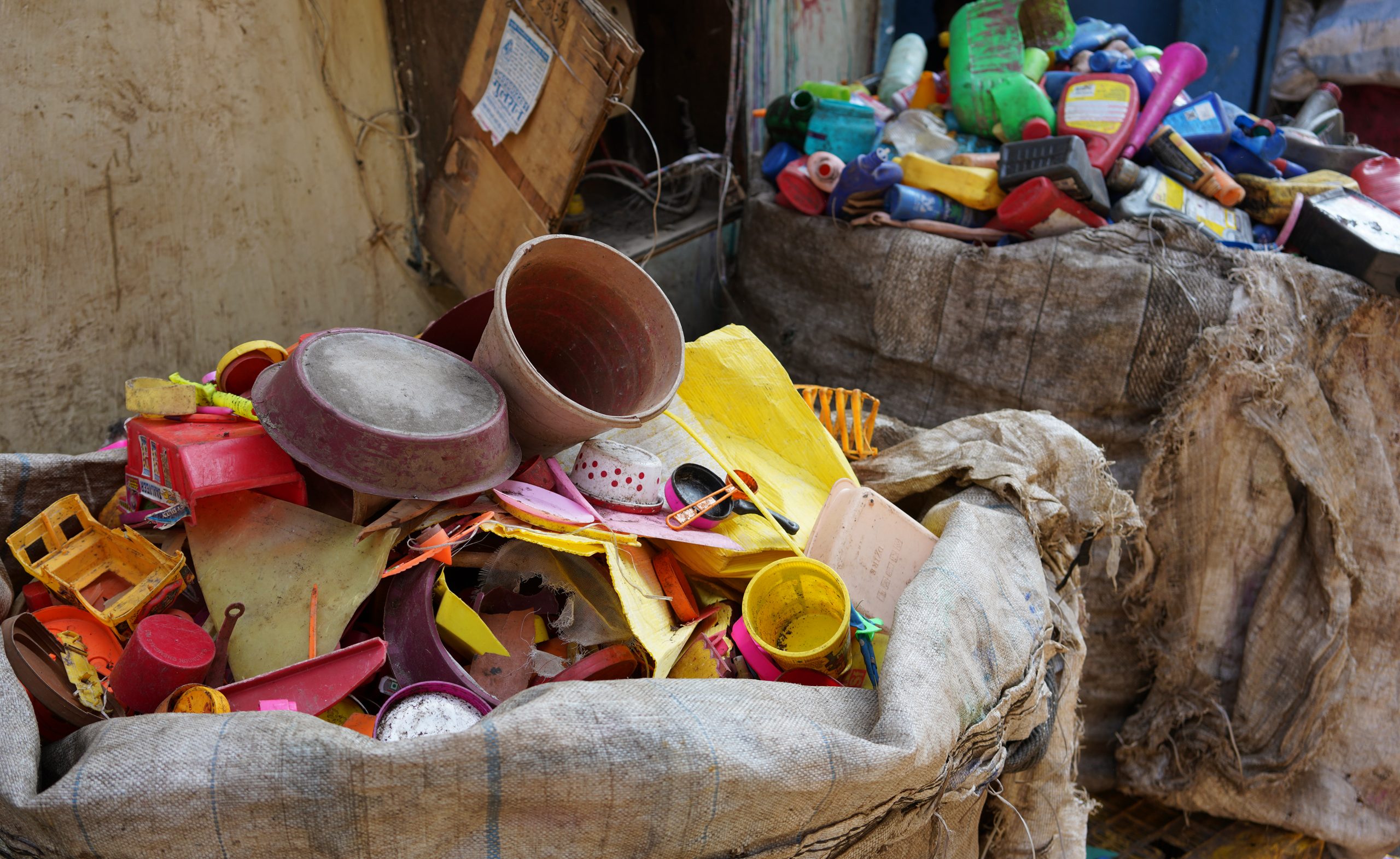 Since the 1950s, more than 9 billion tons of plastic has been produced worldwide. Many plastic items are used once and thrown away. As most plastics do not naturally degrade, they remain with us, usually buried in landfill or floating in the ocean. India generates around 3.4 million tons of plastic per year, of which 60 – 80% is recycled, boasting one of the highest rates of plastic recycling in the world. Recently, a total ban of single-use plastics by the state of Maharashtra has brought the informal recycling industries further into the media spotlight. The policy responds to waste management, marine plastic pollution and that the requirement for recycling relies on this process of self-organised work undertaken almost entirely by those with low incomes, low social status and migrants. In the city of Mumbai, the main centre of the informal waste management industry is located in Dharavi, the city’s largest informal settlement. The 13th Compound, on Dharavi’s north-western rim, processes approximately 80% of Mumbai’s hard domestic waste, where up to 250,000 rag-pickers supply 40,000 people employed in grassroots recycling micro-enterprises, working in risky and unsanitary conditions.

Recent work by Doron and Jeffrey (2018) charts India’s complex struggle with managing waste and sanitation; not least because images of public squalor, widespread open defecation and rampant plastic and chemical pollution undermine claims of ‘modernization’, as well as directly affecting infant mortality, public health and the living conditions of the poor. Alongside this, a long tradition of frugality, repair/mending, and jugaad (‘frugal innovation’) contrast sharply with the logics of consumerism and social exclusion, which means that material cultures and inequalities are foregrounded in public debates over waste and disposability.

The unique context of working in this way with people employed in the informal waste management of the city is that the very process of cleaning, collecting and recycling operates outside of state interference or support, it happens in spite of a municipal drive for a “cleaner greener Mumbai’. In this instance the confrontation with state power is a political act that challenges the invisibility of waste work and the social status of those individuals who handle waste. The vital contribution made by informal waste recovery through the self-organised recycling sector remains undervalued and largely invisible, echoing the marginalized and disposable status of the extremely poor workers that sustain it (Gill, 2010). 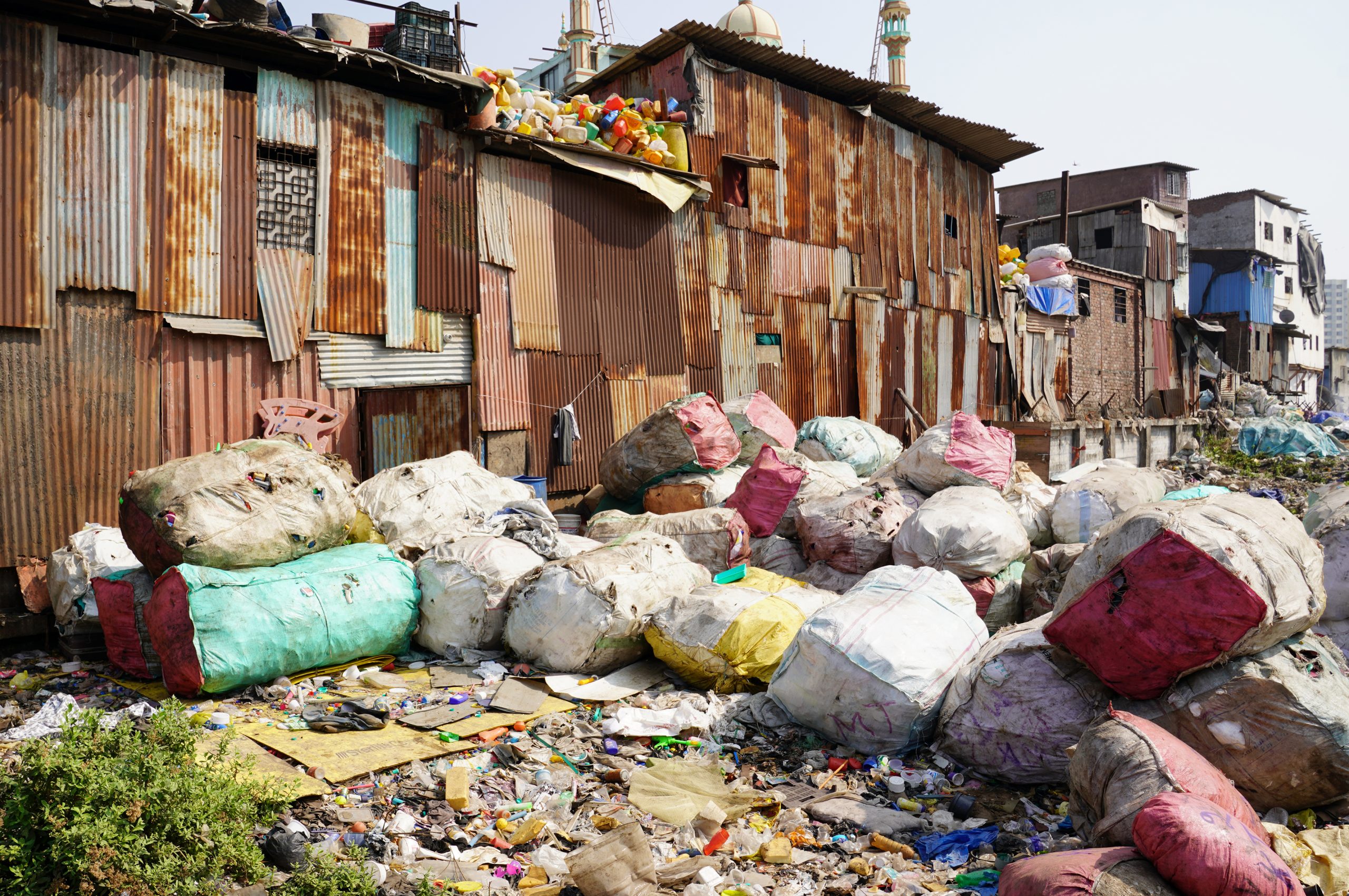 Almost all of the environmental issues we face today are linked to consumption, overexploitation of the World’s natural resources and the means of overproduction that supply global consumer markets. And yet, in our current debates about plastic and attempts to reduce or ban its use, little or no correlation is made to the behaviours of consumer society nor the reliance on petrochemicals for its production. This project attempts to render visible the shocking truth of our consumer habits not simply through the visualisation of the wicked problem of waste, but how the colourful morphology of plastic mirrors the crisis of consumerism.

The construction of the Plastic Mahal and its movement around the city, between different sites,  are at the centre of the project. The temporary monument is constructed entirely of plastic from the informal recycling centre, which has been collected across the city of Mumbai over a 6-week period. Large plastic items are assembled using rivets and plastic welding. The structure has an armature that holds the plastic walls and roof together. At night the structure is illuminated with LED lights so that it glows in multicolours.

The mobile structure pulled through the streets, also borrows aspects of form from a processional temple car. In Hindu culture large wagons carrying the face of a Hindu god are known as juggernauts (from jagannath) signifying an unstoppable force or phenomenon, in this case consumerism itself. The project should be read as ‘secular ritual’ recombining traditional actions with personalised symbols, languages and everyday gestures that are able to create emotional connection and cultural significance for the participants.

At the heart of the performance and temporary public sculpture is an engagement with the future of ritual and symbolic systems of meaning (Schechner, 1993), understood as the continued encounter between imagination and memory translated into performative acts of the body. Combining the role of ritual and tradition is about the making of new stories, or creating new symbols and symbolic action, as a means of talking about the informal sector of waste management and the infrastructural collisions in the city of Mumbai that excludes, repels and eradicates as it rapidly develops.

The project opens up time/space for playfulness and reflection revealing the creative processes that generate new cultural knowledge. The process of collaboration, co-authorship and co-production prioritises ‘Creativity as agency’ in which the foremost requirement is for participants to become more empowered to determine their own potential and futures (Jeffery, 2005). It asks what such a ritual can communicate to its participants, and to spectators – about the survival of Mumbai’s urban poor and as a way to deal with urban and ecological crises.

In a city of ever increasing verticality, the project subverts the conventions of monumentality by performing temporary sculpture as anti-monument. Whilst employing monumentality in the act of making a symbolic action, the temporal dimension as well as material cycle mean the temple is reabsorbed into the production of new consumer goods. It combines the permanence of plastic itself with the radical impermanence of its recomposition (at the end of the performances, the plastic temple is returned to the 13th compound and reprocessed). 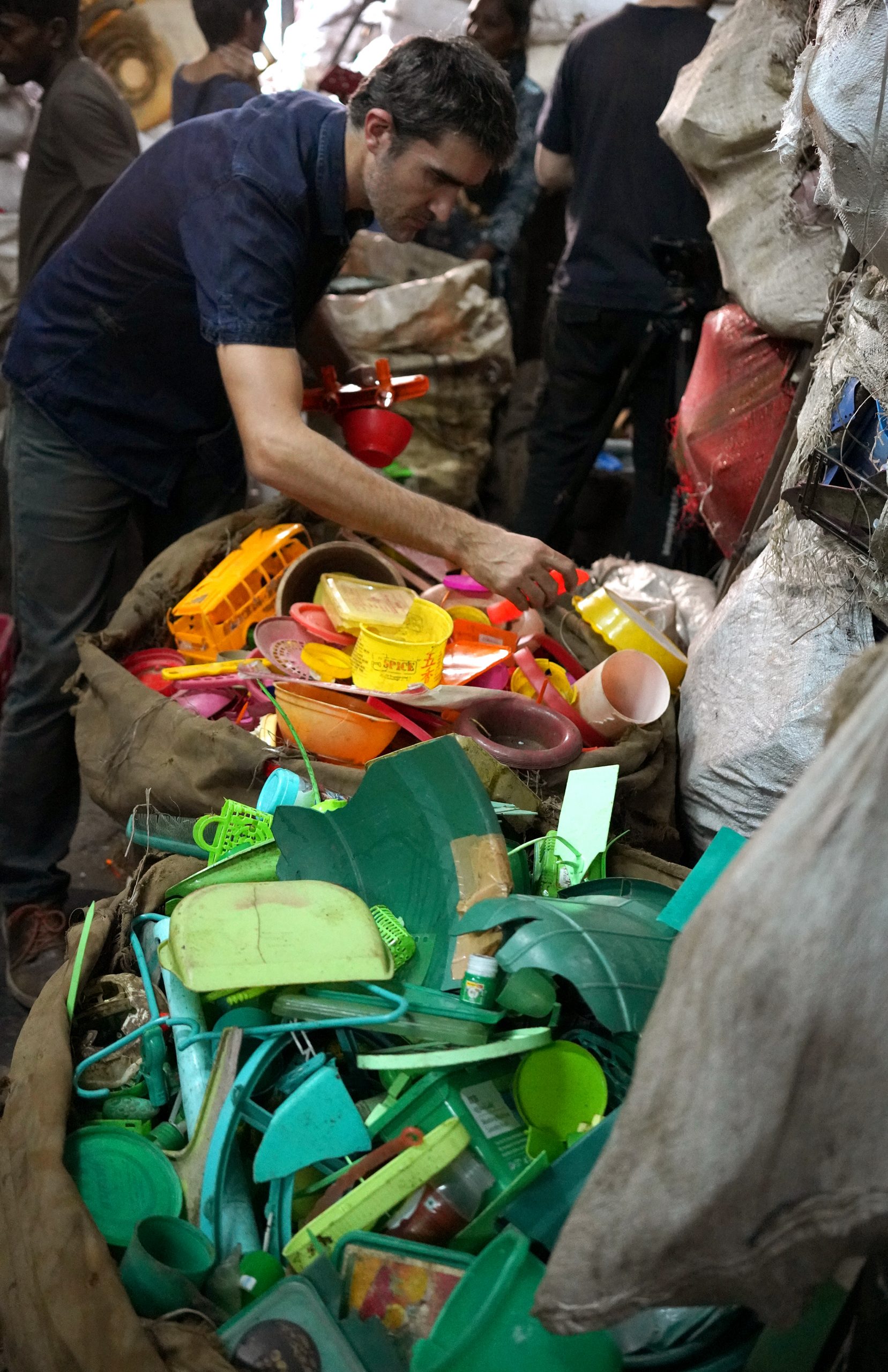 This project is delivered in partnership with Acorn Foundation and co-curator Graham Jeffery, with the recycling godowns of the 13th Compound and individual recyclers, supported by the artist residency programme at Compound 13 Lab located in the heart of Dharavi’s recycling industry: www.compound13.org The Lab is an emergent ‘maker space’ in an area of Mumbai that might be described as one of the largest informal aggregations of (re)maker and (re)manufacturing spaces on the planet. Compound 13 Lab offers young people access to current technologies in digital media, music, 3D design and printing, and is intended to be an experimental learning space where issues of work, waste and survival in the 21st Century can be explored.

Through a series of curated residencies with artists, designers and engineers the activities of the Lab explore narratives that challenge received notions of disposable products and materials, reflecting on the reproduction of labour and the ‘biopolitics of disposability’ (Giroux, 2007). The negative perception and marginalisation of informal labour, in particular the social class of those handling waste materials and human sanitation themselves become waste, seen as disposable.

Doron, A. and Jeffrey, R. (2018) Waste of a Nation: Garbage and Growth in India, Boston: Harvard University Press

Schechner, R (1993) The Future of Ritual, writings on culture and performance. London: Routledge