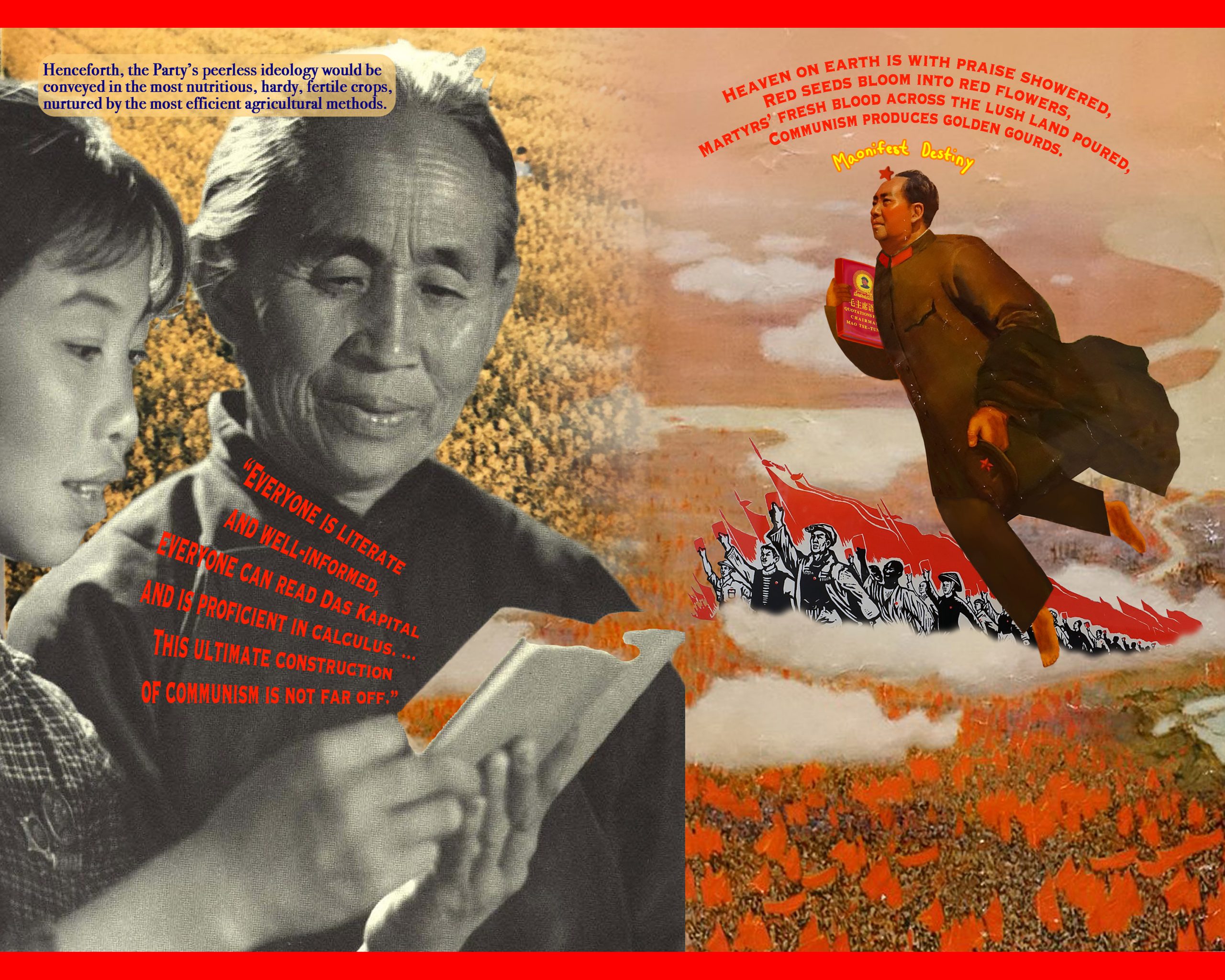 From 1958 to 1962, between 17 and 55 million people died in mainland China from famine.[i] From 1966 to 1976, between 750,000 and 8 million died again in revolutionary violence.[ii] During this same period, more than forty billion volumes of political writings by the country’s paramount leader were printed and recited across the nation.[iii]

The variation in these estimates does not explain (but perhaps is explained by) the ongoing absence of these massive historical traumas from public memory and discourse, both within mainland China and beyond its firewalls. Nor does it explain how such astronomical physical and intellectual privation could have been possible. The figures and stories from those decades seem so high to be absurd, stranger than fiction. That students beat their teachers to death? That a single man could have been so revered? And what does it mean to attempt to imagine how all this could have been, over forty years after the fact, when we have supposedly left all this hunger, violence, and fanaticism behind?

The project: take with a grain of salt

Unfolding across over three hundred full-color pages, the bilingual artist’s book ZÀO: A History of Chinese Dishcourse through Famine and Revolution retells modern Chinese history through “faction” (fact and fiction). Neither purely historiographical nor entirely fictitious, this invented genre is a critical response to my study of propaganda from the Mao Era: what genres and forms — and what artistic, narrative, and historiographical protocols — are adequate to address an archive that is itself comprised of fictions posing as fact? Whilst this propaganda was blooming, tens of millions of people were starving to death or murdered for political reasons. In its exhumation of massive historical trauma concealed behind exuberant propaganda, ZÀO deploys myriad narrative strategies: archival images, historical research, personal memoir, fictional storyline, bilingual (mis)translation, critical analysis, and hand-drawn illustrations.

A speculative and polyphonic history, ZÀO satirically reconstructs the events leading up to and during the Great Leap Forward (1958-1962) and Cultural Revolution (1966-1976), Maoist movements that were supposed to shepherd China into an unprecedented communist utopia but instead ushered in the worst famine in all of recorded human history, decades of the most successful and pervasive ideological indoctrination of a population, and a near civil war in which citizens murdered each other for being “counterrevolutionaries.” Even though Chinese dissidents have likened these devastations to a Chinese Holocaust, these disasters are actively censored in mainland China, and have also eluded western public discourse. As a result, it is difficult to access a clear view of the full extent of China’s past (and ongoing) atrocities.

To resist such erasure, and also to ruminate on how one can recuperate historical memory in spite of such amnesia, ZÀO asks readers to reimagine 20th-century Chinese society as “Signese” society — an alternate civilization that practiced “linguaculture,” a conflation of linguistic and agricultural production wherein words and food were literally the same.

At the same time, this factional narrative is both supported and contradicted by archival propaganda I collected through original research, autobiographical snippets of my family’s persecution during the Cultural Revolution, and my own commentary, illustrations, and translations. In the thick of all these didacticisms, digressions, and detractions, ZÀO draws from my own experience growing up in China, inherited memories of my family’s life during the Mao Era, and my attempts as a member of the Chinese diaspora to understand a history that is already absurd in and of itself. In this manner, ZÀO tentatively operates as a Chinese-American project of “postmemory,” which scholar Marianne Hirsch describes as “the relationship of the second generation to powerful, often traumatic, experiences that preceded their births but that were nevertheless transmitted to them so deeply as to seem to constitute memories in their own right.”[iv]

Research: the bread and butter

ZÀO draws inspiration from original research I undertook while in China and the U.S. from 2018 to 2019. This research includes Chinese- and English-language books, articles, and a self-curated archive of over 7,000 photos and scans of primary sources. Culled from libraries and online databases, these primary sources include propaganda posters, newspapers, advertisements, photos, etc., from the 1890s to 1980s that are rarely available to the public eye, be it in China or the U.S. This archive is further supplemented by photos of contemporary public propaganda I took while in Beijing.

Currently, ZÀO primarily exists in digital format on the site Issuu for free access. Limited physical copies will be donated to libraries and bookstores across the U.S. Through its online and material circulation, ZÀO aims to give visibility to an era of material and intellectual famine that has never received the recognition it warrants, especially at a time when memory about these tragedies is deteriorating even further.

This waning memory is in turn already enabling history to repeat itself.

While I was studying historical Maoist propaganda in Beijing, contemporary pro-Xi propaganda had escalated to infest everywhere from public parks to university canteens. Xi also changed the constitution to remove presidential term limits, harkening again to the very policies and cult of personality of the Mao Era. And yet very few people seemed aware, or to care about, this reproduction of history: mainland textbooks recently rebranded the Cultural Revolution as “Difficult Explorations” (艰辛的探索) instead of “Ten Years of Catastrophe” (十年浩劫). Nobody else was borrowing the archival materials I was studying — an unsurprising situation given that such research is actively discouraged because of mounting political pressure. As a result, these invaluable primary sources were so poorly preserved that many were physically disintegrating. In a vicious cycle, this amnesia further desensitizes the public to the rising tide of policies and rhetoric reminiscent of the Mao Era — and all this proceeds yet again, it seems, to the general ignorance of western countries.

In the face of the eerie convergence of my historical study with events unfolding in real time in China, ZÀO endeavors to resurrect the imperiled archive of the Mao Era and open it up to new, critical interpretations. It is imperative to recuperate, preserve, and address these invaluable but endangered historical experiences, memories, and artifacts. As art, narrative, and as research, ZÀO is a contribution to this urgent endeavor.

Siri Lee is a visual storyteller based between New York and Beijing. Born in Texas, she moved between different cities in both the U.S. and China for most of her early life. As a child in Beijing, she developed a love for Chinese cuisine, language, and culture. In school, she was taught legends of Chairman Mao and revolutionary martyrs. Outside of school, she learned of June Fourth, the hunger of the Mao Era, and her family’s history of persecution and imprisonment by the mainland Chinese government. ZÀO emerges from her personal experience, familial memories, archival research, wishful thinking, and rude awakenings.